Give Login Contact Search
At the Foundation / Grantmaking / Summer of Purpose: Darrin Redus

In early June, facilitators of the Northeast Ohio Medical University (NEOMED), along with AmeriCorps HPAC leaders, volunteered to bring SOLE [Self Organized Learning Environments] to the Cleveland Public Library system for their Staff Development Day. In all, over 500 staff members participated in these SOLE sessions that allowed them to create their own learning identity and collaborative environment without a teacher’s facilitation.

The day started with formal introductions from the director of the library, Felton Thomas, and a Skype video conference with Sugata Mitra, the TED Talk award winner who funded the School In The Cloud initiative which ultimately gave rise to SOLE. To conclude introductions, my co-supervisor Jeff McClellan presented the SOLE concept to the audience along with their activities for the day. From there, the auditorium was divided into two large groups of 250, with each group being further divided into five groups of 50. 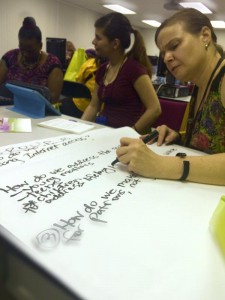 At the heart of every SOLE session, there is a big question to answer, and the two groups of 250 approached the big question, “How can libraries of the future foster lifelong learning?” With 45 minutes to research their question and 45 minutes to present their findings to their respective groups, the staff set out to self-organize their learning through collaboration in brainstorming, limited technology, and the utilization of social contagion which results in synergy.

Following the first group of 250 staff members, the second group was brought in to discuss, research, and present their findings to their group in the same fashion. 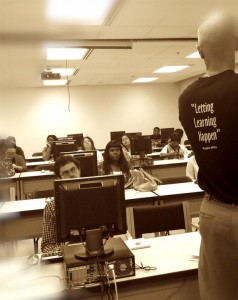 Jeff and Gina, my supervisors, Natalia, a graduate student of Sugata Mitra, and Robert and Angela, other SOLE experts, were facilitators of each group of about 50 while the AmeriCorps leaders/volunteers helped provide input and general direction to the entire process.

Acting as a volunteer, technical support staff, and photographer, my role was to bring the event to life through pictures and post them to social media on Twitter @Sole_Cle and Facebook SOLE CLE. Up to this point, SOLE has only been an idea on paper and topic of many conversations. After experiencing it and being able to float around the building to see all the different groups in action working through each other, I was able to adopt a deeper appreciation for the SOLE concept as a practical means for the future of education. Upon having the opportunity to network with volunteers of the AmeriCorps HPAC, I discovered another Mount Union student… small world! Overall, the day was a huge success that concluded with a cookout lunch under the tent with all staff members.

Darrin Redus, a sophomore at the University of Mount Union, majoring in Human Resource Management, will be placed at Northeast Ohio Medical University (NEOMED). Darrin assists with a research and evaluation study of the Self Organized Learning Environment (SOLE) model, collecting and analyzing data and engaging with local schools.