Give Login Contact Search
In the Community / #SummerOfPurpose: Armin Ameri

Our #SummerOfPurpose blog series follows this year’s Cleveland Foundation Summer Interns as they spend 11 weeks working with Cleveland-area nonprofit and public sector organizations. In today’s blog we hear from Armin Ameri, who is working with the Refugee Response, where he works in close cooperation with the Director of Education and Education Program Coordinator to research, design and implement strategies and tools that will support and cultivate relationships between mentors and newly settled refugee families in Cleveland. 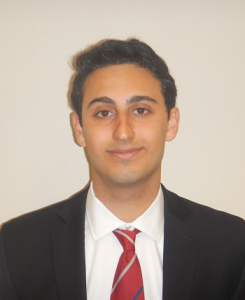 Admittedly, I wasn’t entirely sure what to expect from this Cleveland Foundation internship. An acquaintance of mine from school, knowing I had never worked in the nonprofit sector, offhandedly recommended I check it out, claiming that I could learn a lot from such an experience. As such, I applied on a whim, unsure of what to expect but eager to try something new.

Following my acceptance into the program, I chose to be placed at the Refugee Response, a small nonprofit operating in Ohio City on Cleveland’s west side. The aim of the organization is to facilitate the acculturation of refugee families in Cleveland through employment training—namely farm work and English classes—along with mentorship programs. Reading through the organization’s website, I found myself immediately identifying with its mission; there is a need to assist the refugee populations of the world, and I wanted to help in any way I could.

In the past, I have held a number of jobs and internships, ranging from work in government offices to journalism. These jobs, while diverse in their missions and functions, held one factor in common: they were all part of a larger, inflexible organizational structure. An intern, or for that matter any employee, could not change or meaningfully impact the institutions around their positions. The operations of the organization would go on un-phased regardless of their actions.

My time at the Refugee Response is a far cry from these past experiences. The office they operate in is small and close quarters, occupied by a staff of just five. The team members work long hours, attempting to expand the organization’s reach while simultaneously refining its existing operations. Each week can be exhausting, as the work done could very well fully occupy the time of a 15-person staff. There’s a pervasive sense that there is always more to be done, that even if everything is running smoothly one must seize the initiative and spearhead projects or apply to grants, anything to boost the outreach of the organization.

And while the work is often onerous and consistently stressful, it never lessens the morale among those working in the office. Indeed, these are among the most passionate and hardworking people I’ve had the pleasure of working with. They own their work, exhausting themselves for the betterment of the surrounding community and its residents. From day one I too felt this sense of urgency, that my work matters, and that my time spent here is making a difference.

This sense of ownership is due in large part to proximity. Along with the nonprofit’s education team, I spend my weeks working one on one with the refugee families in our program, diagnosing and addressing their academic needs. We work to research, compile, and provide individualized resources for each student, aiming to promote their educational development and English language skills. Each hour spent in the office has a direct effect on the lives of those living in nearby communities; every program has a measurable impact on the academic development of our students. More so than any job I’ve worked in the past, I own the work I’ve done here and feel the impact of my time.

Most importantly, and beyond the work itself, my time at the Refugee Response has reshaped my perspective towards Cleveland. Often when people discuss the global refugee crisis, it comes through the lens of nightly news or political chicanery. While these perspectives have some value in the realm of public policy and debate, relying solely on these talking points would be missing the forest for the trees.

After spending time with the families, learning more about them and their ordeals, it has become easier for me to hear past the white noise of public discourse and to see the problem as it is. The bottom line is that these are people whose plights must be addressed, whose cultures should be valued, and who ought to be welcomed with open arms. These lessons became all the more apparent though my time at the Refugee Response, working alongside people passionate about their work and proximate to an issue that demands attention. The Cleveland that I see now, a city that welcomes others openly and celebrates its diversity, is one that I had never known prior, and exploring this new culture has been an invaluable experience.