It’s no secret that Greater Clevelanders are known for their generosity and hometown pride. Groups like the Cleveland Club of Washington, D.C. – an association Washington D.C. residents who share a keen interest in Cleveland – embody this spirit in their efforts to give back and maintain ties to Northeast Ohio.

Earlier this year, we joined the Cleveland Club of Washington, D.C. to host a luncheon in the heart of our nation’s capital, where Cleveland Foundation President & CEO Ronn Richard shared highlights and updates from our community with club members and like-minded Washington D.C. residents. At the luncheon it was clear how deeply the members of the Cleveland Club care about what’s happening in Northeast Ohio, so it was no surprise when we heard they had coordinated with a group of Strongsville residents to kick off the holiday season by giving back at home and away. 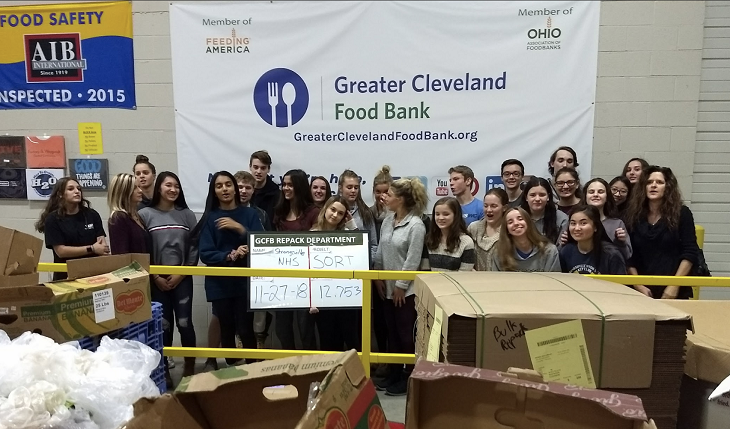 On Nov. 27, Giving Tuesday, 18 Cleveland Club members – including the organizer of the effort, Michael Palinkas – volunteered at the D.C. Central Kitchen to prepare meals for the city’s hungry citizens. The volunteers made salads, baked drumsticks, carved turkey, and doled out apple sauce that was trucked to hunger relief distributors in the Washington area. Meanwhile, back in Northeast Ohio, a group of 27 students from the Strongsville High School National Honor Society as well as three adults volunteered their time packing grocery bags for distribution at the Greater Cleveland Food Bank, the largest hunger relief organization in Northeast Ohio.

Across hundreds of miles, two groups with ties to Greater Cleveland united to serve those in need. This simple act was a wonderful demonstration of our community’s heart and the strong bonds we share – no matter where in the country our lives take us. Kudos to those who planned and participated in this Giving Tuesday effort.

Do you know a Greater Clevelander living in D.C.? Learn more about the Cleveland Club of Washington, D.C. here.