Give Login Contact Search
In the Community / Neighborhoods / Making the Case and Space for Play: How Cleveland Residents & Organizations are Leading the Development of Public Recreation Spaces

When you think about neighborhood parks, you probably think about properties and recreation areas owned or maintained by the city government. While this is often the case, here in Cleveland we are also seeing new public spaces created thanks to the initiative of local residents and organizations. These resident-driven development efforts demonstrate how we all can play a role in making our communities more vibrant.

Just last week, I attended the grand opening celebration of the BoxStop, an open-air market in Cleveland’s Central neighborhood. This project will provide space for the community to gather and incubate small neighborhood businesses. The BoxStop is led by Burten, Bell, Carr, an innovate community development corporation that values community.


I was also excited about the opening of a children’s playground downtown. Let me repeat: a playground downtown. This means that families are electing to live AND play in Downtown Cleveland, and they have demanded amenities. The downtown playground was a project of Downtown Cleveland Alliance (DCA), an agency with a mission to attract businesses to relocate downtown. Over time, DCA has learned that in order to attract businesses, it must create place – even for the little ones. 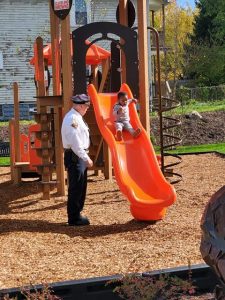 Finally, Officer Derek Owens Memorial Park in the Buckeye neighborhood is having a soft opening in a few weeks. The park is a compelling story of the transformation of a vacant lot into a place for the community to gather, complete with a labyrinth, walking path, and of course, a play structure.

These public space projects are not multi-million-dollar efforts, and they don’t necessarily create jobs, but they serve an important purpose; these parks and gathering spaces make Cleveland loveable, not just livable, by creating places for kids of all ages to play. And this purpose is something that the Cleveland Foundation has long recognized as imperative to the health and well-being of our community. I will close with this statement from the 1920’s Cleveland Foundation-commissioned report titled ‘Public Provision for Recreation,’ which proclaimed:

“it is vital to Cleveland as well as to the boys and girls themselves because unless this play life is normal and abundant, the city cannot expect active, intelligent and effective citizens.”

For more current research on the importance of play, visit: