From August 31 through September 4, thousands of people joined us for a week-long series of virtual events to celebrate an annual meeting unlike any other in the Cleveland Foundation’s history. Dozens of speakers, including foundation staff members, community partners and national thought leaders, shared their expertise and led timely conversations on defining issues. We also announced several new commitments that will shape the foundation’s work in the years ahead. In case you missed it, here are a few highlights and takeaways from Cleveland Foundation Annual Meeting Week Presented by KeyBank: 2020 Community Vision.

Centering the week’s programming was the 2020 Cleveland Foundation Annual Meeting Presented by KeyBank on Sept. 1. Cleveland Foundation President & CEO Ronn Richard delivered his annual “State of the Community Address” – this year, in a video format. In his address, Ronn reflected on the historic challenges that our community has faced so far this year as well as the momentous opportunity to rebuild stronger than we were before the pandemic. You can watch Ronn’s full State of the Community Address on our YouTube channel here.

You can watch recordings of all the sessions on our YouTube channel here.

Throughout our annual meeting week, we shared a number of new grants and funding commitments:

Take your vision to action with ioby & Neighbor Up

The decisions being made by city and county officials are more important than ever, but the vast majority of meetings where these decisions are 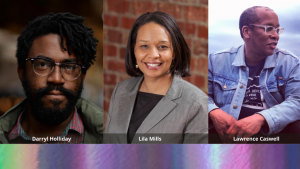 made receive no media coverage and produce minimal records. As part of our annual meeting week, we co-hosted an open house workshop with City Bureau and Neighborhood Connections on Sept. 3 to introduce Cleveland Documenters, a one-year pilot program to recruit, train and pay Greater Clevelanders to document official meetings of the Cuyahoga County and City of Cleveland governments in an effort to promote accountability and transparency and to expand the toolbox for residents to take action in their communities. If you’re interested in becoming a Cleveland Documenter, you can learn more here.

Watch this year’s Robert D. Gries Keynote Lecture at The City Club of Cleveland: The State of Local Journalism

This year’s Robert D. Gries Keynote Lecture featured national thought leaders Karen Rundlet, Director for Journalism at the Knight Foundation, and John Thornton; venture capitalist, Founder of The Texas Tribune, and Co-Founder of the American Journalism Project; in a conversation on the state of local journalism in America. If you weren’t able to tune in to watch the broadcast live, you can view a recording of their conversation here.