Give Login Contact Search
At the Foundation / Grantmaking / Stories of Impact: Cleveland VOTES is building a movement for equitable civic engagement in Greater Cleveland 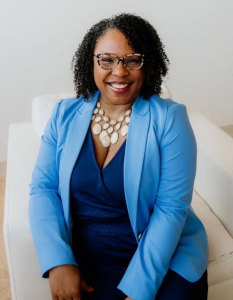 Founded in 2014 by Erika Anthony and Crystal Bryant, Cleveland VOTES is a nonpartisan, democracy-building organization that works with local nonprofits and community partners to promote active and equitable civic engagement in Greater Cleveland. The Cleveland Foundation supported Cleveland VOTES’ efforts to engage residents around the 2020 census, and we recently awarded the organization a $115,000 grant to support their work year-round in Greater Cleveland. As midterm elections near, we spoke with Cleveland VOTES Co-Founder and Executive Director Erika Anthony about her organization’s mission, impact, and what’s next.

What inspired the launch of Cleveland Votes?

In 2014, Crystal and I were both involved in the Greater Cleveland Reentry Coalition as co-chairs of a committee focused on community engagement and education. Early on, we realized there was a need to elevate knowledge about voting rights and access for people who were incarcerated or had prior convictions.

There were a lot of myths out there (and unfortunately still are), including that people who are currently or formerly incarcerated can’t vote. In reality, if you are coming home after being incarcerated, all you need to do is re-register to vote. Or, if you are in jail for a misdemeanor or awaiting trial, you can still vote by mail.

While returning citizens are just one segment of the community, it’s significant in Cuyahoga County because we have the highest percentage in all of Ohio’s 88 counties of people coming out of prison. It’s important that these thousands of people who have been incarcerated have opportunities to engage civically around voting.

How has Cleveland VOTES’ approach developed over the past eight years?

We began with a focus on returning citizens’ voting rights and civic engagement, but organically we saw the need to think more broadly about historically disenfranchised groups. This led to our focus on building the capacity of nonprofit organizations to promote equitable civic engagement.

We hosted voter education forums, candidate forums, and trainings to help organizations understand what they could and could not do as 501c3s to help their clients and/or constituents participate in democratic processes. Now, we provide them with grants and serve as a technical assistance arm as we build a network and movement of organizations in Greater Cleveland promoting a more civically informed and engaged community. 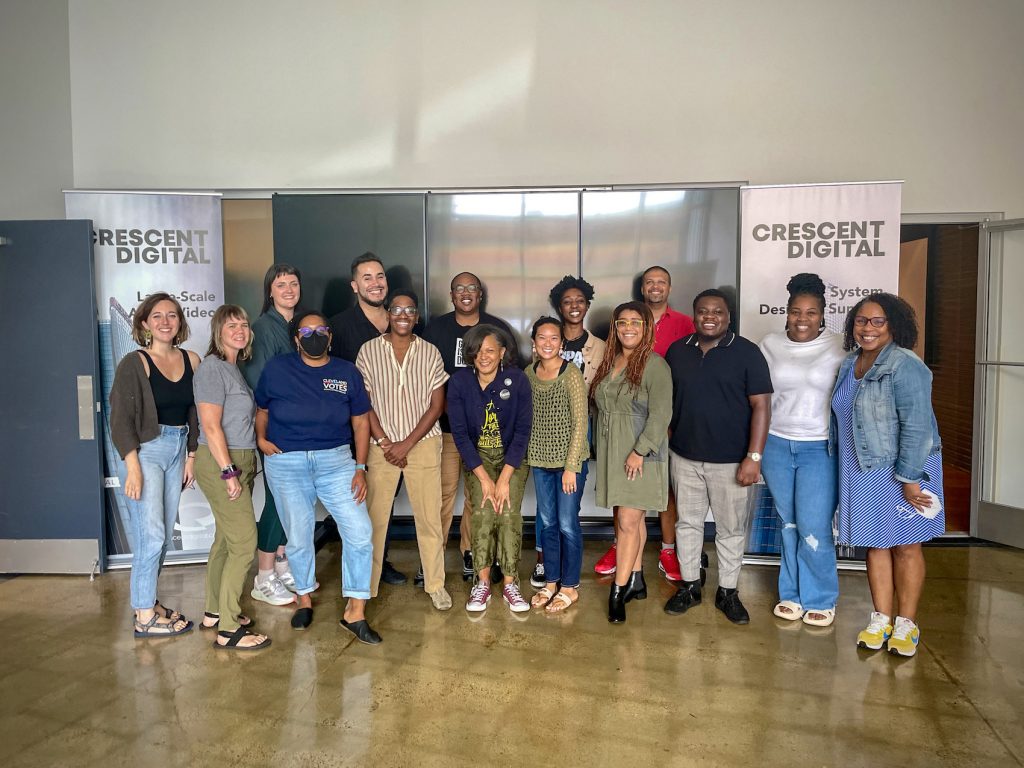 How would you describe Cleveland VOTES’ impact?

Our biggest impact is our relationships. When we started, it was just Crystal and me. From a scaling standpoint, we knew there was no way we could meet the great needs of our community without spending time fostering and cultivating deep relationships in the community. We’ve been able to grow our staff over the years, but sustaining, strengthening and building relationships remains so important to our work. We can’t troubleshoot or mitigate all that’s happening in the democracy space on our own, but we can all learn from one another, even in different industries and serving different communities.

In addition to relationships, we also make direct, monetary investments in organizations. For volunteer-based organizations, even a modest grant can be a gamechanger, allowing them to pay stipends or hire a part-time organizer for the election cycle. We started with small grants ranging from $250 to $500, and just this year, we provided 23 grants to local organizations totaling $150,000. It’s a really proud moment for us to see this growth, but we understand there are still far too many organizations doing civic engagement and democracy-building work that aren’t receiving funding on par with the scale of their reach and impact in the community.

What are the biggest opportunities for democracy building here in Greater Cleveland, especially as we approach the next election?

Democracy building goes beyond elections. We have an opportunity to help people see how democracy shows up in their everyday lives and understand the role they can play in it. When people understand that, they are more motivated to show up on election day.

We see that right now as people across the political spectrum are energized to show up on election day or get involved in politics in response to high-profile issues that impact their daily lives. These issues can be a spark that unites people.

There are many ways to show up in a democracy, and we all bring different skill sets to the table. At Cleveland VOTES, we want organizations and people to understand the various ways they can shape the social fabric of our democracy.

In 2020, our organization and dozens of partners across our city were activating and engaging in efforts to support the 2020 census and election. Despite the global pandemic and racial uprising, our community was ready to support and mobilize. To that end, we created our first Commit to Cleveland toolkit to serve as a guide for individuals and organizations to see the multiple ways they could activate in our community. We have continued to update this toolkit, and our 2022 version is composed with a series of case studies as well as tangible and tactile strategies that may be deployed by a wide array of community members. 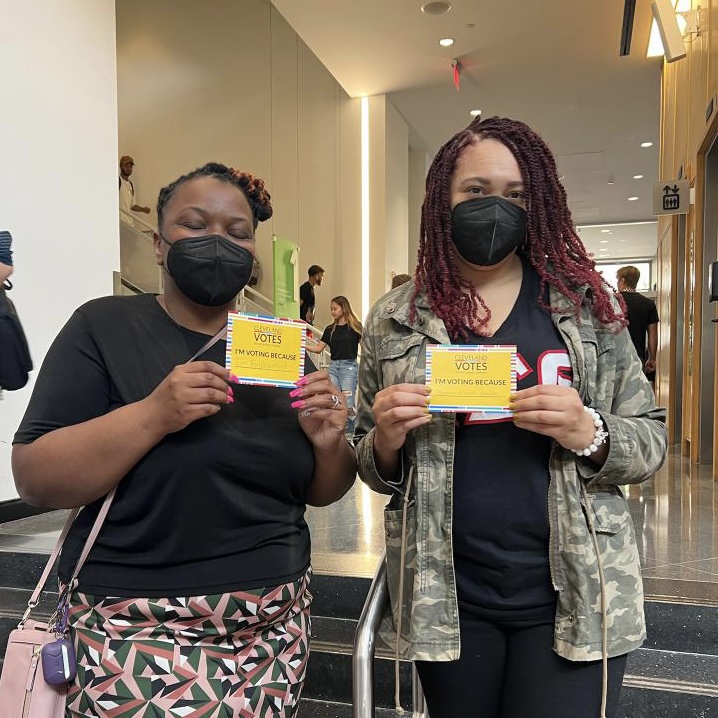 Today’s hyper-partisan environment can be demoralizing. What gives you hope for the future?

It’s a privilege for me to be in the position that I’m in at Cleveland VOTES. My team and I have a really intimate perspective into the city that not everyone gets to see. With all these negative headlines, we try to direct our energy as a team to joy in democracy. There’s lots to be upset about and feel deflated about, but there are people working hard in our community trying to connect with residents to understand how democracy shows up in and for their lives.

How can people get involved?

Join us at an upcoming event! National Voter Registration Day is Sept. 20, and we’re partnering with the Cuyahoga County Board of Elections to organize events across the city. We are expanding the celebration to a full week from Sept. 17-23, with events planned in different neighborhoods and hosted by different organizations. Last year we had just over 40 events, so we’re excited to build on that this year. Please be sure to check our website for a full calendar of events as well as our social media (Facebook, Instagram, LinkedIn and Twitter). You can also download the National Voter Registration Day event calendar here.

You can also mark your calendar for “Vote Early Day” on Oct. 28, which is the last Friday of early voting before the general election. Plans are still in the works, but you can visit Cleveland VOTES’ website and sign up for our e-newsletter for updates.

In addition to engagement around the upcoming election, you can also get involved in Participatory Budgeting Cleveland (PB CLE), an effort launched in 2021 to give residents a say in how American Rescue Plan Act (ARPA) dollars for the City of Cleveland are allocated. Participatory budgeting has been done in other cities, but this is relatively new in Cleveland. Clevleand VOTES is excited and proud to serve as an early endorser, and we are continuing to work with PB CLE to make this participatory practice a reality in Cleveland! You can learn more and get involved at pbcle.com.

We invite you to get in touch with Cleveland VOTES year-round via info@clevotes.com and at www.clevotes.com.