CLEVELAND – The Cleveland Foundation today honored John Zitzner, president of Friends of Breakthrough Schools, with its 2015 Homer C. Wadsworth Award. The award is given annually to a local leader who has demonstrated creativity, innovation, ingenuity, risk-taking and good humor in a civic, volunteer, nonprofit or public sector role. Zitzner received the award at the Cleveland Foundation’s Annual Meeting presented by KeyBank.

As president of Friends of Breakthrough Schools, Zitzner oversees the fundraising and advocacy activities for the Breakthrough Charter Schools network. He is the founder of the Entrepreneurship Preparatory (the first independent charter school to be sponsored/authorized by the Cleveland Metropolitan School District) and Village Preparatory schools in Cleveland, which joined two other high-performing Cleveland charter schools in 2010 to form Breakthrough Schools. Zitzner co-founded Breakthrough alongside Perry White (Citizens Academy) and Brooke King (Intergenerational School). 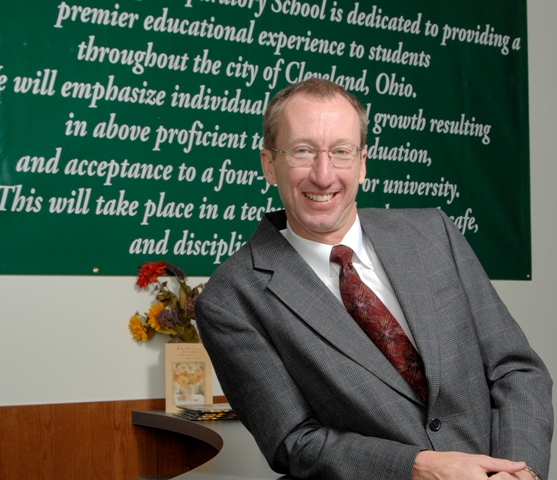 Today, Breakthrough Schools operates 10 schools serving 3,100 scholars, and will soon grow to 11 schools serving 3,500 scholars in the 2015-2016 school year. Breakthrough educates an underserved student population in Cleveland that is 97 percent minority and 83 percent low income. They are among the top rated charter networks in the state. The aspirational goal of the network is to have 20 schools by 2020 serving 7,000 K-8 scholars.

“John is a pioneer in education reform in Cleveland,” said Ronn Richard, president and CEO of the Cleveland Foundation. “His work has positively influenced the lives and prospects of thousands of Cleveland area children. Most importantly, John collaborated with the Cleveland Metropolitan School District to help develop the Cleveland Plan for Transforming Schools, which was created to ensure every child in Cleveland attends a high-quality school and every neighborhood has a multitude of great schools from which families can choose. He is the embodiment of the pragmatic visionary reflected in the legacy of Homer Wadsworth.”

A successful entrepreneur, Zitzner is the founder and former president and CEO of Bradley Company, a Cleveland-based software firm that began in 1983 and was acquired by Xerox Corporation in 1998. He went on to found E CITY (Entrepreneurship: Connecting, Inspiring, and Teaching Youth), a nonprofit organization that provided entrepreneurship education to Cleveland high school students. John is a graduate of Wittenberg University and has studied nonprofit organizational management at Case Western Reserve University’s Mandel School. An Elder at Fairmount Presbyterian Church, John and his wife, Peg, have two sons, both of whom are successful entrepreneurs, three grandsons and a granddaughter.

Homer C. Wadsworth was executive director of the Cleveland Foundation from 1974 to 1983. He was known as a man of creativity, courage, commitment and innovation. Prior to his death in 1994, Wadsworth’s friends and family established the Homer C. Wadsworth Award to identify and honor those in the community who best reflect those qualities.

Established in 1914, the Cleveland Foundation is the world’s first community foundation and one of the largest today, with assets of $2.1 billion and 2014 grants of $98 million. Through the generosity of donors, the foundation improves the lives of Greater Clevelanders by building community endowment, addressing needs through grantmaking, and providing leadership on vital issues. The foundation tackles the community’s priority areas – economic transformation, public-school improvement, youth development, neighborhood revitalization, and arts advancement – and responds to the community’s needs.