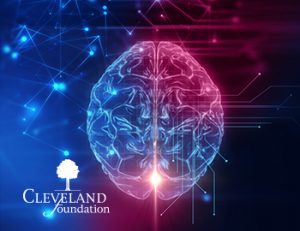 The goal is for the CBHI to become a national center of excellence to advance the understanding and treatment of a myriad of brain diseases and disorders that affect nearly 100 million patients in the U.S. alone, from early childhood to adulthood, including Alzheimer’s disease, Parkinson’s disease, autism, epilepsy, schizophrenia, depression, and traumatic brain injury.

The foundation’s grant, the largest gift to date for this project, will support the recruitment of some of our nation’s most promising scientists to Cleveland and the CBHI as junior faculty members.

“Cleveland is already home to some of our nation’s finest brain health researchers and clinicians, and we are proud to support this initiative to connect and magnify this expertise,” said Ronn Richard, president and CEO of the Cleveland Foundation. “We believe this will help establish our city as a destination for brain health treatment and result in enhanced patient care locally and nationally.”

The proposed CBHI will be housed at Case Western Reserve’s School of Medicine, with some research programs that include patient consultations, clinical trials and treatment taking place at the initiative’s affiliate hospitals throughout Cleveland.

“We deeply appreciate this generous support from the Cleveland Foundation to advance city-wide efforts in brain health,” said Barbara R. Snyder, President of Case Western Reserve University. “This grant not only demonstrates the foundation’s recognition of the importance of this work, but also its appreciation that our greatest medical challenges are best addressed by broad collaboration. I also thank each of our hospital affiliates for coming together in this groundbreaking initiative.”

Among those involved in the initial conception of the institute were Anthony J. Furlan, the medical school’s Gilbert Humphrey Professor of Neurology and co-director of the Neurological Institute at University Hospitals Cleveland Medical Center, and Anthony Wynshaw-Boris, Professor and Chair of the Department of Genetics and Genomic Sciences at Case Western Reserve.

Over the past three years, the National Institutes of Health has awarded more than $250 million to 400 investigators working at 90 institutions as part of the BRAIN Initiative. Among those researchers is the Cleveland Clinic’s Chair of the Neurological Institute Dr. Andre Machado, who received a nearly $5 million grant last year for clinical trials testing deep brain stimulation for stroke survivors. That grant helped lead to a first-of-its-kind surgery earlier this month.