Download
The Fifth Migration: A Study of Cleveland Millennials 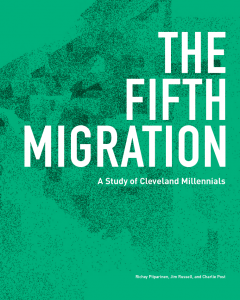 CLEVELAND – In a first-of-its-kind in-depth look at millennials in Northeast Ohio, a Cleveland Foundation-commissioned study by The Center for Population Dynamics at Cleveland State University reveals Cleveland is eighth in the nation in the growth rate of college-educated millennial residents aged 25 to 34. And Cleveland’s millennial residents – those born between 1982 and 2000 – are leading a rapid ‘fifth migration,’ the term for the re-urbanization of metro areas nationally, here in Cleveland.

The study, “The Fifth Migration: A Study of Cleveland Millennials,” reveals that while Cleveland has experienced a millennial migration since 2008, it was during the growth experienced from 2011 to 2013 for which Cleveland tied for eighth in the nation (along with Miami and Seattle) in the percent increase of college-educated millennials. The study also shows Cleveland ranked eighth nationally in the concentration of highly-educated millennials in the workforce (those with a graduate degree).

Beyond this so-called ‘brain gain,’ the statistics show a higher concentration of millennial residents overall, regardless of education. In 2013, 24 percent of Greater Cleveland’s population was comprised of millennials (ages 18-34), up from 20 percent in 2006.

“We are on the early edge of this fifth migration – and our explosive millennial population growth is changing the face and trajectory of Cleveland,” said Lillian Kuri, Program Director for Arts and Urban Design at the Cleveland Foundation. “We need to understand its impact on the city and the neighborhoods and rapidly harness the local and regional resources to sustain this momentum.”

Prior to 2007, the numbers show Cleveland was actually experiencing ‘brain drain,’ with college-educated millennials leaving the area. The launch of Cleveland’s millennial migration coincides with the start of the Great Recession (2008-2010) and continued through the post-recession (2011-2013). The study cites that the tremendous growth Cleveland and other ‘rustbelt’ cities, such as Detroit and Pittsburgh, have enjoyed during this period can be attributed to numerous factors, including the cost of living.

“Cleveland is converging with national trends when it comes to gains in educated young adults,” said Richey Piiparinen, Director of The Center for Population Dynamics at Cleveland State University’s Maxine Goodman Levin College of Urban Affairs. “It is important to understand why this is occurring, particularly from macroeconomic standpoints. This analysis attempts to paint a fuller picture of what is driving this ‘brain gain,’ as opposed to simply documenting it. One factor discussed is the opportunities in Cleveland regarding lower barrier of entry related to cost.”

To reinforce that point, in examining the net migration into Cleveland, the study reveals Cuyahoga County drew the most migrants from Kings County, New York (including Brooklyn). The average millennial income in Kings County was $40,440 in 2013, versus $34,597 in Cuyahoga County during the same time period, but when adjusted for cost of living, the New York salary is actually $5,590 less. And the median rent in Kings County is $2,583 versus $1,088 locally.

“While the brain gain associated with the recent millennial migration is something to celebrate, the lack of diversity among Cleveland millennials compared to other cities is something that we need to work to improve,” summed up Kuri. “We also need to understand the migration patterns of the non-college educated millennials and include them in strategies to ensure all young people see Cleveland as a place where they can succeed and thrive.”

The analysis was completed using data from various Census databases, including the Decennial Census, the American Community Survey, and the Current Population Survey. Cost of living data was compiled using the Bureau of Economic Analysis. The graphic design and data visualization for this study were done by the Portland firm Paste in Place.

Established in 1914, the Cleveland Foundation is the world’s first community foundation and one of the largest today, with assets of $2.2 billion and 2014 grants of $98 million. Through the generosity of donors, the foundation improves the lives of residents of Cuyahoga, Lake and Geauga Counties by building community endowment, addressing needs through grantmaking, and providing leadership on vital issues. The foundation tackles the community’s priority areas – economic transformation, public-school improvement, youth development, neighborhood revitalization, and arts advancement – and responds to the community’s needs.