**DUE TO TREMENDOUS PUBLIC INTEREST, TICKETS TO THE 2018 ANNUAL MEETING WERE RESERVED WITHIN 8 HOURS OF AVAILABILITY. TO STAY UP-TO-DATE ON THE LATEST CLEVELAND FOUNDATION NEWS AND EVENTS, PLEASE SIGN UP FOR OUR NEWSLETTER AT THE BOTTOM OF THIS PAGE.**

CLEVELAND – The Cleveland Foundation today announced that acclaimed architect Sir David Adjaye will give the Robert D. Gries Keynote Lecture at its 2018 Annual Meeting presented by KeyBank. Adjaye, principal and founder of Adjaye Associates, whose credits include the Smithsonian Institute National Museum of African American History and Culture, will be joined in conversation on stage by Cleveland Plain Dealer art and architecture critic Steven Litt. 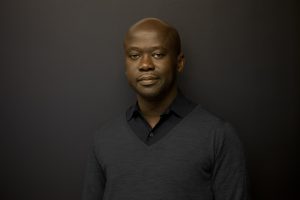 This year’s annual meeting will take place Tuesday, May 1, at the Connor Palace at Playhouse Square. Free tickets will be available via the ticket office starting Monday, April 2.

“Sir David Adjaye is one of the most exciting and thought-provoking innovators in the architecture world today,” said Ronn Richard, President & CEO, Cleveland Foundation. “Whether it is his career-defining work with the Smithsonian or his exciting new project with the National Holocaust Memorial and Learning Centre in London, Sir David Adjaye is the perfect voice to bring to Cleveland as our community continues to transform across shared spaces and places. We are grateful for KeyBank’s continued partnership and look forward to honoring the accomplishments of our donors and community partners and sharing our goals for the year ahead.”

Adjaye is recognized as a leading architect of his generation. Born in Tanzania to Ghanaian parents, his broadly ranging influences, ingenious use of materials and sculptural ability have established him as an architect with an artist’s sensibility and vision. In 2000, he founded Adjaye Associates, which now has offices in London, New York and Accra with projects in the United States, United Kingdom, Europe, Africa, Asia and the Middle East. His largest project to date, the $540 million Smithsonian Institute National Museum of African American History and Culture, opened on the National Mall in Washington, D.C. in the fall of 2016 and was named Cultural Event of the Year by the New York Times.

Other prominent completed projects include the Idea Stores in London, which were credited with pioneering a new approach to library services (2005); the Moscow School of Management SKOLKOVO (2010), and the Sugar Hill mixed-use social housing development in Harlem, New York (2015). Ongoing projects include a new home for the Studio Museum in Harlem, a new headquarters building for the International Finance Corporation in Dakar, Senegal, and the just-announced National Holocaust Memorial and Learning Centre in London.

Adjaye has amassed numerous accolades for his visionary work, including Design Miami/Artist of the Year in 2011, the Wall Street Journal Innovator Award in 2013 and the 2016 Panerai London Design Medal from the London Design Festival. In 2017, Adjaye received a knighthood from Queen Elizabeth II for services to architecture and was named one TIME’s 100 most influential people. In February, he was named the 2018 recipient of the Thomas Jefferson Medal in Architecture.

“We are proud to support this annual celebration of community philanthropy as part of our century-long partnership with the Cleveland Foundation,” said Beth Mooney, Chairman & CEO, KeyBank.

The annual meeting will begin with the State of the Community address delivered by Cleveland Foundation President and CEO Ronn Richard, and will also include the presentation of the 2018 Homer C. Wadsworth Award, given annually to a local leader who demonstrates creativity, innovation, ingenuity, risk-taking, and good humor in a civic, volunteer, nonprofit, or public sector role.

The meeting will begin promptly at 4 p.m. with a community reception to follow. Those interested in attending can reserve tickets free tickets starting April 2 by calling the Playhouse Square ticket office at (866) 546-1353 or by visiting www.PlayhouseSquare.org. Up to four (4) tickets per person are available on a first-come, first-served basis.