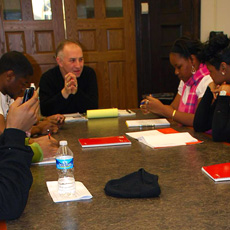 For more than two hours these bright young people, who volunteered for the program, are challenged to create characters and scenarios, and improvise scenes among themselves as part of the important background research into character development and the crafting of a compelling structure for a play.

Overseen by the district’s Director of Arts Education Tony Sias, these students will work with Mr. Yula two days a week after school for the next eight weeks and in the process write and perform in their own play. Their first homework assignment included researching important events in Cleveland, the U.S. and the world during the years 2007-09, which will be the time frame for the play.

“But information is not enough. Information is different than knowledge,” according to Mr. Yula. It is not enough for a writer or an actor to have information about the people or the situations in a play. “You need to know what the knowledge means – the ability to analyze is critical for the artist.”

The premise of the student’s play is deceptively simple: three characters, from different backgrounds, become friends in college and then go their separate ways, only to come together a year after graduation.

But their diverse backgrounds and the different experiences each has after university will create the interest, the conflict and the resolution that will form the unique story of the play. “Something happens to make a character more than just a person,” according to the playwright, and Özen helped the students understand that their play must have believable characters, not just stereotypes.

I was privileged to observe this early developmental session for the play, and was impressed with the very important questions and choices the students began to wrestle with. Simply deciding who the characters were – their ages, backgrounds, race and gender, economic status – raised very critical questions the students had to resolve. Should they all be black? How diverse should they be and still be both believable as friends and representative of Cleveland? Where will each go after graduation and why?

One question struck me as profound. In response to Mr. Yula’s comment about how the playwright must like his characters; “If you don’t like them, you can’t write them,” he said, a student asked, “Do we have to like them at the beginning or can we grow to like them?” This engendered a fascinating discussion about finding the humanity in people – and in the play’s characters, even when you do not like what they do in the play.

This was not easy work for these students. But I was very impressed with the seriousness of their engagement – and I can’t wait to see the play they make. I will be following the development of this work as well as Özen’s engagement with the community via CSU and Cleveland Public Theater through October. So stay tuned.