The local media landscape of Northeast Ohio reflects the alarming trends faced by newsrooms across the country. With financial and journalistic resources continuing to shrink, the gap between news organizations in Northeast Ohio and the diverse needs of consumers continues to widen, often at the unfortunate expense of residents seeking basic information to navigate daily life.

There is an opportunity for innovation in our local news and information ecosystem, and for the local philanthropic community to help support more collaborative news ecosystems. Here are the initiatives the foundation has undertaken so far. 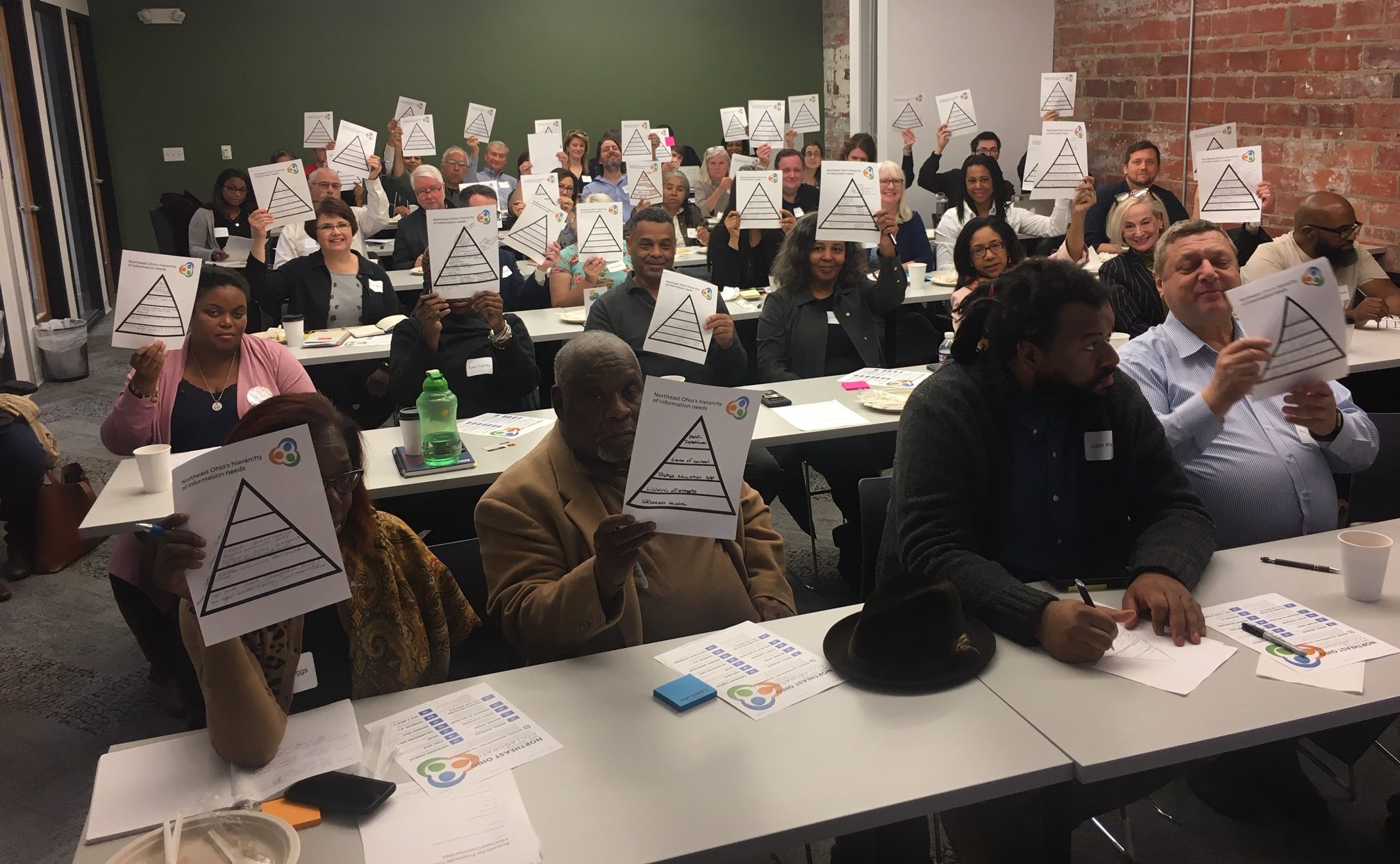 Participants hold up their individual hierarchy of information needs diagrams at a Northeast Ohio collaborative journalism gathering from October 2019 at the MidTown Tech Hive.

The collaborative will utilize two-way texting to give voice to underrepresented communities in shaping local news coverage. Through relationships with neighborhood-based organizations and other community partners, Ask The Land will recruit neighborhood residents to enroll in texting conversations, source environmental justice stories directly from these communities at the grassroots level, provide local news coverage about environmental issues for residents and stakeholders in these communities in an easily accessible way, and provide members of the community with a place to ask questions and seek support and advice about the environmental justice and equity issues that affect them.

The collaborative will produce a series of weekly short features over the course of 12 weeks that will culminate in a documentary highlighting the environmental struggles and resiliency of the Buckeye-Woodland and Buckeye-Shaker neighborhoods. These shorts will primarily feature work creating greenspaces of all sizes, addressing food apartheid, reducing invisible boundaries, as well as connecting with initiatives outside of the neighborhood that address environmental issues.

The collaborative will utilize Cleveland Documenters to talk with community leaders who have activated vacant land in their neighborhoods and, by doing so, tended to their community’s need for beautiful spaces that feed the soul. This project will be done in three phases: a listening survey; reporting; and transformation. Cleveland Documenters will begin by surveying their neighbors, Neighbor Up members and other Cleveland residents about their environmental justice concerns. A team of Cleveland Documenters will then conduct video interviews with community gardeners talking about their work and its history, successes and challenges, and what the future holds. They will also take the learnings from the surveys and transform a vacant lot into a vibrant community space; they will share videos, talkbacks, and other communications from this space as well as others throughout the summer via publishing partner A Greater Buckeye and with media partner WOVU. The project will close with the showing of a short documentary in the fall.

This project will use restorative journalism by empowering women in Cleveland to tell their first-person narrative via a number of channels, including written stories, radio and photography.

This collaboration will help close a gap in understanding about the safety and rights of those who witness crime, while pushing for solutions that could promote a safer system in Cleveland. Visit project site

This project will involve and inform residents of the 80-year-old public housing development on Cleveland’s East Side around pending changes as a result of a proposal to rebuild the estates. Visit project site

This collaborative will explore how media partners and other community organizations can come together to build a culture of reading at Charles Dickens Elementary School in Cleveland’s Mt. Pleasant neighborhood in order to address the K-3 literacy rate. Visit project site

With 59 percent of Cleveland residents living in food deserts, this project will provide a platform for residents in the MidTown, Glenville and Kinsman neighborhoods to tell their stories through a number of different channels. It will strive to better connect residents to food and other key resources around health and well-being.

This collaborative will tackle the issue of eviction and tenant rights in Akron and Cleveland across a number of communication platforms from the perspective of both tenants and landlords, ultimately producing a tenant’s guide in both English and Spanish. Visit project site

This project will address the issue of infant mortality in Akron and Cleveland in a two-pronged approach: 1) educating traditional media audiences about how bias and racism play into the treatment of women of color; and 2) use storytelling across a number of social platforms to reach and inform the most at-risk residents of these two communities. Visit project site

By empowering the residents of the Buckeye-Shaker Square neighborhood via a central news hub and first-person storytelling, this collaborative aims to arm residents with the information necessary to advocate for their own well-being.

This restorative journalism project will engage the residents of the Goodyear Heights neighborhood in Akron to elevate an unheard community perspective in regard to the importance of safety and representation at Reservoir Park Pool and access more generally to recreation opportunities.