Give Login Contact Search
In the Community / Arts & Culture / “We Thought We Knew How To Dance!” 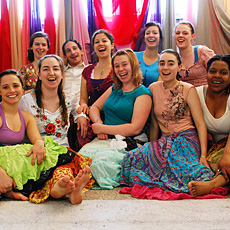 So said Sarah Morrison of MorrisonDance, a local modern dance company, about her dancers’ first rehearsals with Sevi Bayraktar, a Turkish “Roma,” or gypsy dancer, and choreographer. Sevi is in residence with Young Audiences and MorrisonDance for five months through the Cleveland Foundation’s Creative Fusion program.

Indeed, when I watched a recent rehearsal for “Mysterious,” the dance Sevi is making and that will be premiered on Cleveland Public Theater’s DanceWorks series April 15 through 18, I saw body parts moving independently that I never knew could do so. The company’s warm-up music was a cover of Sting’s “Legal Alien” (Englishman in New York) and the opening of Sevi’s dance mimics the kind of Sharks and Jets rivalry of West Side Story (but with all-women gangs). So it is safe to assume we will be seeing some high energy, cross-cultural story-telling.

As I came into the MorrisonDance studio, I encountered a bicycle – Sevi’s. She bought it as soon as she got here and has been tooling around Cleveland under her own steam for the past several months. “She knows more people in more places than I do.” says Sarah – who has lived all around the city for years.

Indeed, one of the wonderful things that I have seen both from Sevi and from Turkish playwright Özen Yula, who is also here under the auspices of Creative Fusion, is their absolute blindness to any borders, barriers or Balkanized neighborhoods that too many of us take for granted in Cleveland. Sevi bicycles with ease from Cleveland Heights to Ohio City. Özen travels from Gordon Square to Playhouse Square to University Circle, and works comfortably with black inner-city children, multicultural college students and local artists.

Sarah says that Sevi sees Cleveland with new eyes and that she has helped bridge communities for the company. Much has been said about how art bridges cultures, but it’s the artists that build the bridge. Artists have an openness to experience that lets them do this more naturally than people in other professions, I believe, and I am happy to have these artists from elsewhere help us see ourselves anew. 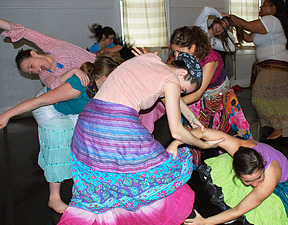 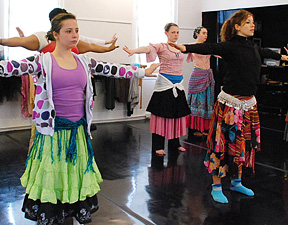