Give Login Contact Search
In the Community / Arts & Culture / Dangerous 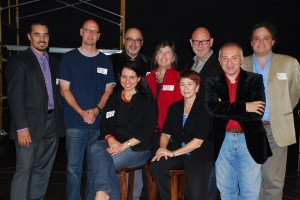 Is theater dangerous – can it cause riots, upset the applecart of perception, change the world? Or is it merely a fancy of the intelligentsia that art can actually counter prejudice, illuminate the dark corners of injustice, actually advance society?

Who gets to decide what an artist can or cannot say or portray?

Where is the line between the artist’s serious effort to illuminate the human condition and his or her indulgence in a personal rant? Is the artist just a three-year-old, with no responsibility beyond self-expression?

Should the artist be ambiguous – bury a controversial message in slanted references, comedic devices or obscure satire in order to get published/staged/shown? Or to not get censored?

What happens when artists choose not to write about what is important to them? And is this self-censorship born out of fear or out of a desire to be commercially successful?

These were among the very thorny questions that a group of theater artists came together to explore and discuss last Saturday at “Holding our Tongue: Censorship in the Theatre,” a symposium at Cleveland Public Theatre organized by Faye Sholiton, the local representative of the Dramatists Guild and supported by CPT, Cleveland State University and the Cleveland Foundation.

At the center of the symposium was the work of Ozen Yula, contemporary Turkish playwright who is in residence in Cleveland as part of the Cleveland Foundation’s Creative Fusion program, and Betty Shamieh, internationally known Arab playwright, author, actor, and screenwriter.

Mr. Yula, whose many plays have been performed all over the European continent and whose plays and books are translated into more than 10 languages, including Arabic, saw his play, “Lick, Don’t Swallow,” censored in Istanbul just as he was traveling to Cleveland for his residency here. Betty Shamieh has written and spoken often about the challenges of writing from a perspective that is too often pigeonholed, marginalized and dismissed, and her own efforts to speak faithfully about issues she experiences as a Palestinian woman in post-9/11 America.

Among the 70 or so attendees at the symposium were students and/or faculty from Carnegie Mellon, Ohio State, Cleveland State, Kent State, Notre Dame and Ohio Wesleyan Universities. Lots of local theater people too – but nowhere near the number who should have been there. I did not see any representation from African Americans, Latinos or the Asian community. I don’t understand why.

There was so much rich discussion in the day that I cannot possibly capture it all in this post. So I will simply note a few (seriously paraphrased) comments by various participants that struck me as I sat in CPT’s Gordon Square Theater.

About the training of theater artists:

“Students today are more excited about working with a famous playwright than about working on a play that could make a difference. There is so much focus on training workers – employees, how to fit into the commercial theater machine, rather than training artists.” Michael Mauldin, Director, CSU Theatre Arts Department

In discussing how silence can be good or evil:

“There are three kinds of silence: the polite silence of desiring not to embarrass – a kind of social grace. Ghandi’s silence of just not accepting – quietly resisting. And the immoral silence of refusing to see and respond to injustice.” Ozen Yula

About honesty of mission for American contemporary theaters:

“If a theater claims to be pro-actively progressive and focused on issues of social justice, then it must put work on the stage that some people will not like, that comes from the perspective of the minority. They have to risk the debate.” Betty Shameih

I want to create an environment where people who feel offended aren’t censored themselves. I welcome the opportunity to hear about what may have offended someone in a play – to have the conversation that begins a real dialogue. Raymond Bobgan, Producing Artistic Director, Cleveland Public Theatre

I titled this post “Dangerous” and I have a lot more to say about how I think art – especially theater – really is and should be dangerous in the most helpful ways. But that’s another post. Watch for it.

Below are some photos from the day including Dramatist Guild Creative Affairs Director Gary Garrison, Theater J Director Ari Roth as well as others mentioned in this post. Photos taken by fabulous local actor Chris Seibert – thanks, Chris. 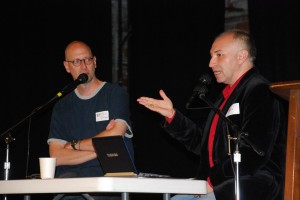 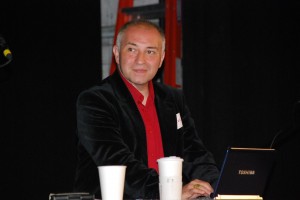 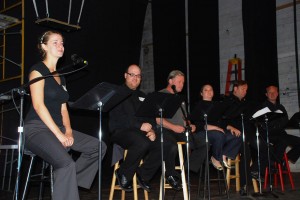 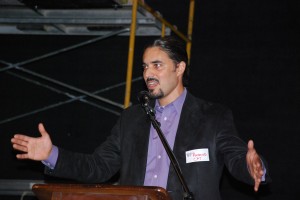