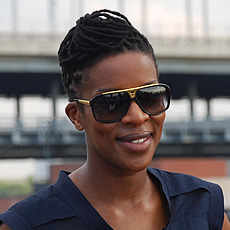 Nandipha Mntambo is a scientist, an artist and a thoughtful commentator on the cross-cultural manifestation of our entwined human and animal natures. Beginning with an early interest in pathology and forensics, she migrated into the arts to explore more deeply the intersection of that which attracts or repulses us about our bodies.

She is a progressive thinker, deeply connected to the mythic roots of human culture. She is South African, but is not defined by a post-Apartheid world view.

“There is not only one way to look at the world,” she says. “I am trying to find new ways of speaking about myself in the context of a very complex globalised experience. Looking at my experience and wanting to encourage a new language of art that is not focused on ‘othering’ rather on the understanding of the fact that we are all connected.”

‘Nandi,’ as she is called by the friends she is making here in Cleveland, is a decidedly unique artist whose work uses both the conceptual imagery and the actual material of tanned bull and cowhide to express her creative ideas about a range of emotional and physical aspects of the human condition. Her work has been shown in exhibitions around the world, including Oslo, Barcelona; Spelman College in the United States; and Great Britain among others.

Using her own body as a mould and template, she shapes tanned hides into headless body parts and places them in physical contexts that suggest situations that are often purposely ambiguous, leaving interpretation up to the observer. Her work is familiar and disturbing, haunting and beautiful with frequent cross-gender references.

Nandi is here as one of the Cleveland Foundation’s Creative Fusion international artists in residence, hosted by SPACES Gallery. While here she will create a new body of work, in painting, rather than cowhide, which will open in an exhibition at SPACES in November. But as part of her engagement with the extended community she is also lecturing and working with students at Tri-C, artists at Zygote Press and elsewhere.

She recently gave a lecture at Oberlin College. About 30 students crowded into Visiting Professor Arzu Oskal’s studio on the Oberlin campus to talk with Nandi and see her work via PowerPoint and video. The students were deeply engaged and asked many questions. Through the discussion she talked about how many world cultures used bovine imagery in their myths: Zeus and Europa, and the minotaur in Greek mythology, Apis, Hathor, Hesat and Nieth in Egypt, and the great Bull of Heaven in the Mesopotamian myth of Gilgamesh. In India, there is actually a white bull demigod, a guardian of Shiva’s temples named Nandi – something our Nandi discovered some time after adopting her creative focus.

Although she is South African, Nandipha presents herself as a citizen of a very contemporary world. She has traveled extensively – “I live in my suitcase,” she says – and her creativity is focused on the universal. “I want my work to be an affirmation of a globalized world.”

Look for more about what this very interesting young artist is doing in our community in future blogs. 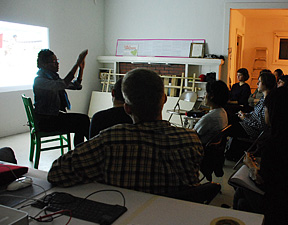 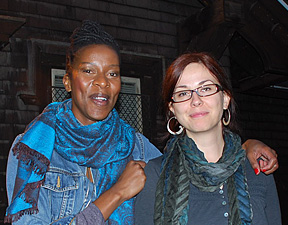 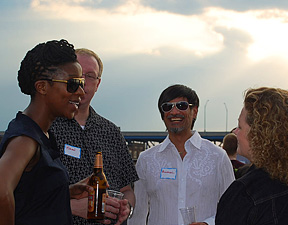