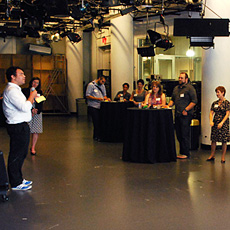 Although he’s been here a few months already, Creative Fusion international artist Cristian Schmitt, from Chile, was just recently welcomed by the community at a reception held at the Idea Center in PlayhouseSquare. Creative Fusion, now in its second year, partners with Cleveland’s cultural, educational, and civic institutions to host foreign artists for long-term, community-based residencies as a way to share culture and creative ideas at a deeply engaged level.

Based in Santiago, Cristian is an architect/designer whose work has focused on environmentally friendly affordable housing and temporary housing for disaster victims. Chile’s great earthquake a few years ago put his talents to work. He is here on a six month residency as part of the Foundation’s Creative Fusion: International Artist in Residence Program. His hosts are PlayhouseSquare, the Kent State Urban Design Collaborative, Downtown Cleveland Alliance, and Cleveland Public Art, and collectively this group has launched a unique program, called Cleveland tm (teach + make). The goal is to engage a creative designer to create and prototype a new product that can be trademarked, manufactured, and sold through the long-discussed District of Design centered in Playhouse Square. The program also includes an educational component, connecting the artist/designer with other local artists and students to teach and share product concept and design skills.

While he is here, Cristian will work with students at Max Hayes Vocational High School, teaching students how to read blueprints and architectural drawings, and design a small structure and help them built it.

For DCA and Playhouse Square, he is looking at the potential for creative re-use of the old corrugated metal RTA shelters that have been replaced by the sleek new Health Line bus stops along Euclid Avenue. The Urban Design Collaborative has generously provided studio and working space for Cristian, and Cleveland Public Art will help him navigate the commercial manufacturing scene here and connect him with local artists.

At his welcome reception, Cristian shared some of his sketchbook drawings that included movable, secure, pop-up retail space for the Public Square-to-PlayhouseSquare retail corridor; attractive, on-street public washrooms that incorporate trees and plantings; and a portable, bicycle-driven laundry for the homeless.

In his remarks at the reception, Cristian talked about a small boy’s experience of his bed shaking during the earthquake in Chile and how his father, in trying to reassure him, also shook the bed to show how the shaking bed couldn’t hurt him. Cristian said, “Maybe in Cleveland we can also shake some beds.”

We don’t yet know what exactly Cristian will prototype for his hosts, but we do know he has been exceedingly busy for the first weeks he’s been here, meeting with architects from Westlake Reed Leskosky, connecting with local artists and commercial manufacturers, teaching at Max Hayes, and traveling to Detroit and Cleveland’s unseen places researching the homeless situation here – which he says, while very sad, is better than the extremely poor conditions at home.