Give Login Contact Search
In the Community / Arts & Culture / Ulysses and Achilles, Fidel and Che 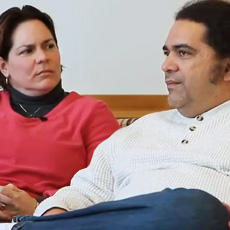 I have been amazed and enlightened by many things I have learned from the Cuban artists who have been in residence these past months as part of our Creative Fusion program. Last week, art historian Meira Marrero and visual artist Josè Toirac presented their work at a lecture in collaboration with the Cleveland Clinic at the clinic’s Glickman Conference Center. And while I’d heard these visitors speak before, this lecture took me deeper into an understanding of the role that art plays in the larger Cuban culture.

Although much of Cuban art is political, it is both revered and respected by the political establishment. I see two possible reasons for this. The world values the arts and so Cuba has invested significantly in training artists. Second, the world values the work of Cuban artists and so the prominence of these artists internationally does credit to the regime.

But there is another, more subtle and sophisticated reason that Cuban art can carry a politically challenging message while being accepted by those it is criticizing. All of the Cuban art that our visitors have presented here is based on fact. Cuban artists are telling their country’s own story and using materials and images taken from their real lives – but repurposing them to carry a message or reflect reality in a way that is deeply meaningful. If and when confronted, the artist can show that the images are merely part of what IS as interpreted through an artistic medium – not a subjective and biased social commentary by a political activist.

So Josè Toirac’s series of photographs juxtaposing current street scenes and buildings in Havana with their counterparts from 50+ years ago is fact – at the same time it comments on what Cuba has lost under the longstanding regime. One work, however, went a little too far. Josè and Meira created an exhibition of the portraits of all of Cuba’s presidents (more than two dozen in Cuba’s turbulent history – some of whom only held office for a few days) which places Fidel near the end as just one of many, followed by his brother and with an empty nail in the wall for the next el presidente. While it would be going too far to say the work was officially censored, the government used the excuse of “this is just not the right time” for the work to be shown in Cuba.

Finally, near the end of the lecture, Toirac explained that Cuba had two heroes – Ulysses and Achilles. When asked about using mythological Greeks as heroes of the Cuban people, Toirac explained that those that carry the culture of Cuba are always looking to the place where Cuban culture intersects with global culture. And in the life of contemporary Cuba, Fidel Castro and Che Guevera stand as oppositional archetypes. Fidel is like the wily Ulysses (Odysseus), always scheming to outwit fate and live for glory and fame.

The long story of Ulysses’ journey as one of the only survivors of the Trojan War bespeaks his, and by extension Fidel’s, triumph over every adversity the gods threw at him. On the other hand, to be mature in the world is to be like Che – not the man, but the symbol who, like Achilles, chose to fight and strive and die for the glory of his homeland.

I was struck by the real and deep connection these very contemporary Cuban artists were making with universal human archetypes of Western civilization, bringing a mythical but shared past into their understanding of the particular and present reality of their lives. It was quite moving.