Last week, a privileged number of us were given the gift of a private concert by Pham Thi Hue, a (perhaps the) world master of ancient ca tru music of Vietnam. Hue is here as one of the Cleveland Foundation’s Spring 2013 group of Creative Fusion artists.  She is hosted by Young Audiences. The concert was in a private home with about 25 people in attendance – board members and friends of Young Audiences, a few Cleveland Foundation staff, and local artists  Hue has met during her time here. 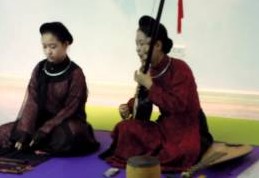 For more about Pham Thi Hue, click on the photo to watch her performing at Concordia International School Hanoi.

Beautiful and serene, dressed in deep blue velvet, Hue sat on a piano bench at one end of the large, Cleveland Heights living room, closed her eyes and began to play and sing.  As one who has heard much and many types of music in my day, I must say I had never heard anything like this. The words seemed to come less from lungs and mouth and more from deep in the throat and heart. The stringed instrument was plucked and strummed delicately and very melodically, but with some unusual harmonies.  We all sat listening, in part not knowing how to understand what we were hearing and in part transfixed by what was clearly deep mastery of the instrument and Hue’s total immersion in the moment.

Next, Hue invited David Badagnani, himself a master of Chinese wind instruments, to play with her – a beautiful and otherworldly duet.  David’s instrument, the sheng, goes back 3,000 years (although probably not that particular instrument!). It was also completely foreign to me. About the size of a small watermelon, it looked like miniature calliope or a tiny pipe organ – a dozen or more ebony pipes of different lengths clustered vertically together around a central drum and with a mouthpiece attached.  But such beautiful sound!

Then came the final treat of the evening. Hue had invited two other local musicians, Ismael Douglas and Josh Sherman, to ‘jam’ with her.  They had met just a few days earlier to see what they could do together. Hue had never heard a steel acoustic guitar before – Ismael’s instrument, and Josh was a master on the Indian tabla (small drum). So, Vietnamese and American musicians improvised on instruments native to three countries for the first time. Hue asked us to envision three clouds in the sky coming together as one.

This was a classical jazz performance of the highest order. Each musician was supported and showcased by the others as they took turns as soloist and came together in a rollicking ensemble. They delighted us – but I think they delighted each other more.  A true cross-cultural fusion through music. One cloud indeed.