Meng-Hsuan Wu (Meng – pronounced Mong), is a Taiwanese artist whose work employs whatever means necessary for her creative expression – paper, painting, sculpture, performance, video.  When Rainey Institute Director, Lee Lazar chose her as Rainey’s Fall 2013 artist in residence, he was totally charmed by her video documentation of a project, On the Move, in which she carried a small house on her back, equipped with a spy camera, and walked, in shoes with toes pointing both forward and backward, interviewing ordinary people about their sense of home. 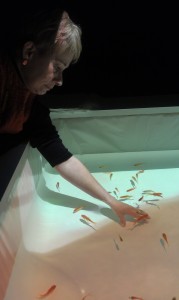 Meng is deeply interested in how people experience their lives through all of their senses and she explored this in a remarkable project she created while here that included video, a pool of water and goldfish. Working with sight-impaired people through Rainey’s partnership with the Cleveland Sight Center, Meng created a small indoor pond, filled it with small goldfish and invited people to take off their shoes and allow the fish to nibble at their bare feet, recording their comments in the process.

Although the fish, the water and the pond were the mediums, what the work really became was an incredible series of memoirs. People sat quietly so as to not frighten the fish, and allowed themselves to be open to the gentle and strange touch of these creatures which we know, but rarely if ever encounter directly as living beings.  In the process, which required trust, particularly among those who were without sight, the experience allowed memories, often of childhood, to rise up from the deep well of the past.  It was a kind of meditation and therapy session. I finally understood why Meng chose the word(s) happyskin as part of her email address.


Meng is a natural teacher and collaborator. As the resident artist at Rainey, she worked every day with the children there.  Interestingly, more and more of Rainey’s clients are Asian, and so Meng was able to make a strong cultural bridge between the increasingly diverse population of youth served by the Rainey Institute. 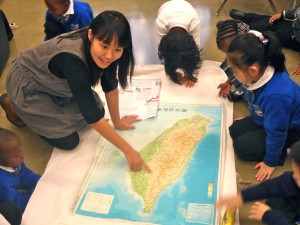 Before she left Cleveland, Meng’s parents came to visit her as did her sister and brother-in-law who live in Boston. Director Lazar invited them all to his home for Thanksgiving – and Hannukah.  Meng’s father, who coordinates services for underserved youth in Taiwan, was interested in how Rainey serves this population, and so there was another, unplanned opportunity for cross-cultural sharing through Creative Fusion.


Meng, we miss you.  Our skin is happy just thinking of you and remembering your joyous sense of wonder and delight.