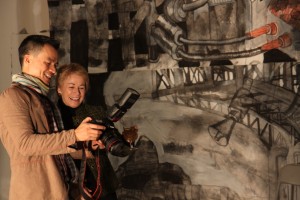 Bui Cong Khanh (Khanh) is probably the happiest and most playful artist you could ever hope to meet.  He is also an old soul, wise beyond his years, whose creative work concerns itself with what we lose when the traditions of the past are cast away.  Khanh works in an incredible diversity of media – clay, paper, canvas, charcoal, oil paint, video. He is a graduate of the University of Fine Arts, Ho Chi Minh City (Saigon) Vietnam and is the 2005 recipient of the famous Fulbright Fellowship at the Vermont Studio Center, USA.

In Ho Chi Minh City, Khanh saw a slum – home to the homeless – destroyed overnight to build new infrastructure.  In one of his most memorable exhibitions, The Past Moved, 2010, he  re-created the street façade as a charcoal drawing and invited the homeless ‘residents’ to have their photo taken in front of what was no longer home, giving them each at least a small memento of their destroyed past. 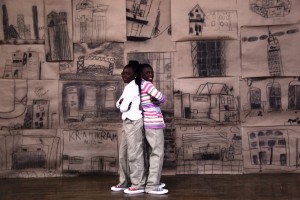 In Cleveland, he worked with children from several inner-city schools to help them draw their neighborhood as a large mural, and photographing them in interaction with the mural and each other.  He also created spectacular murals of Cleveland scenes – our bridges, highways, buildings – the infrastructure of our city.  Some of these works will be reprised at PlayhouseSquare’s International Children’s Festival in the spring. 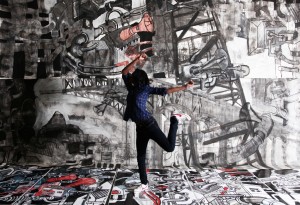 In partnership with his Creative Fusion host, PlayhouseSquare, Khanh mounted these works across the huge stage of the Palace theatre as backdrop to a one-time performance by Inlet Dance.  He connected with a local composer who wrote an electronic score, took charge of the theatrical lighting and made a video of the spontaneous dance event.  Talk about a cross-disciplinary collaboration!  Khanh and Inlet are planning to continue their collaboration.

Here’s what Khanh had to say about his time in our city and the work he produced here:

Until a few months ago, I had no idea where Cleveland was, in which state it was located.  All the children here think the same of my city, Saigon, Vietnam.  That is not ignorance. There is a whole, wide world out ther4e waiting for us to explore and like my people say; fate brought me here. I experienced a sudden wave of nostalgia when I was passing the old World War II industrial factories, the railway bridges, the wooden colonial houses.  All those images reminded me of our history.  And that’s how I would like to tell “The Past Moved” – our stories, in Cleveland, to Clevelanders with high hope they will narrow the gap between Saigon and Cleveland.

Just a few more observations about this delightful and constantly delighted artist.  Khanh reveled in American pop culture.  He could be caught at any moment singing – from Sinatra ballads to rock and pop songs.  And although he had never bowled in his life, he got the second highest score of all the night we all went bowling at Mahall’s.  I think there is nothing Khahn could not do if he put his mind, his big heart and his old soul wisdom to work on it.  We miss him very much.