Give Login Contact Search
At the Foundation / Grantmaking / Summer of Purpose: Call for Places 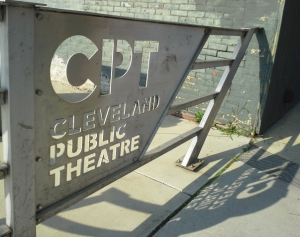 I do not consider myself particularly creative or artistic. I have never been in a play, and the last play I went to was in the Little Theatre of Ursuline College, where I supported a friend from the back row. So how did I end up interning at Cleveland Public Theatre? I hadn’t even considered that site prior to my interview with the Cleveland Foundation. I had walked in with a mental list of my top three host sites, until my interviewers handed me the project descriptions. Suddenly, when asked my top choices, out came CPT. What the heck?

One word stuck out and intrigued me: Pandemonium. Reading on, I discovered it is the name of the theatre’s major fundraising event. The name creates imagery of chaos, exuberance and rowdiness. The mental picture I formed ran so contrary to what I considered a key element of my previous plans: order. I was fascinated. Add the potential to grow in an area I considered a personal weakness – financial reporting – and “Cleveland Public Theatre” spilled out of my mouth, jumping the line faster than an A-list celebrity at a restaurant opening.

Then, I was here, attending a staff meeting right in the heart of the theatre. The staff is small in number, but mighty. Staffers support one another and are dedicated to what they do. There is a stronger sense of commitment to the mission here than in any other organization I have experienced. And I get to be a part of it during my internship.

My primary responsibilities come from two offices: Development and the Office of the General Manager. In Development, I assist with more than just Pandemonium. Working on a series of language file documents and a grant chronology, I have gained a greater understanding of what makes Cleveland Public Theatre a “public” theatre and what makes it so valuable to the community. For the General Manager’s Office, I am working on audit preparation and an archiving project. My role has expanded to include duties associated with the basic financial functions of the theatre, and I’m gaining a level of competence in this area.

I have been able to observe nearly every department. I have posted to Facebook for Audience Engagement, and have sat in on a production meeting with the Artistic Department. I have attended a performance by youth from the Brick City Theatre children’s program and another performance by teens in the Student Theatre Enrichment Program. I heard the STEP teens rehearsing throughout the summer; typing along to the beat of the drums and singing with them under my breath, I felt connected to the production and to the organization.

There is so much going on, even though the theatre is not in the midst of its main season. Pandemonium is fast approaching, and there is a gradual crescendo of buzz and activity. I am becoming more familiar with the event, realizing that the name is intended to inspire the feelings I had upon seeing it, but that the beauty and effectiveness of the event will be in its chaotic appearance. I look forward to whatever I get to experience during what remains of my time here.

Jamie Orr is a graduate student at Ursuline College with a degree in business administration.