Give Login Contact Search
In the Community / Arts & Culture / An Introduction to the Creative Fusion 2014 Fall Class: Anele Mhlahlo

This is the fifth in a series of ongoing blogs introducing you to our new artists. 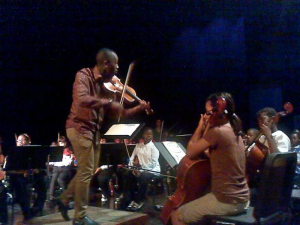 Anele arrived in Cleveland on Labor Day after a long trip from Cape Town, South Africa – his first trip to the United States. After first getting settled into his apartment in the Cedar-Lee neighborhood, the next day he was introduced to 120 children in Rainey’s After School Program. As a highly trained violinist, Anele’s focus at Rainey has been with the El Sistema @ Rainey Orchestra Music Program. He has been teaching and playing for the student musicians on a daily basis and they love his enthusiasm, infectious laughter and his British accent. Anele has shared with them how a violin provided him with a powerful purpose for his life. Teaching them about South Africa – its past and present – has also been an important lesson he has provided.

Anele has visited Case Elementary School and will be connecting with several schools in Cleveland in upcoming weeks. He was also recently interviewed and performed on “Wake Up and Live for the Arts,” a local cable-access show dedicated to the arts. We’ll share a YouTube link to the program as soon as we receive it.

With Creative Fusion artist “alums” Sanjib Bhattacharya and Meng Hsuan Wu in Cleveland, plans are in the works for a performance with three of our favorite international artists! Stay tuned for details.