May 10 was an exciting day at Evergreen Cooperative Laundry, thanks to a big announcement that the co-op made a deal with the Cleveland Clinic to assume operations of the clinic’s laundry facility in Collinwood. The expansion will nearly triple the size of Evergreen Cooperative Laundry, growing the number of employees by 122% by the end of this year!

The expansion is a major validation of the Evergreen Cooperatives concept, which was first introduced in Cleveland nearly a decade ago. The Cleveland Foundation, along with partners including the Cleveland Clinic, University Hospitals, Case Western Reserve University, the Kelvin and Eleanor Smith Foundation, and the City of Cleveland joined forces to support the creation of three worker-owned enterprises: Evergreen Cooperative Laundry, Green City Growers, and Evergreen Energy Solutions. The idea, inspired by a successful cooperative model in Spain and launched as part of our Greater University Circle Initiative, was to leverage the buying power of anchor institutions like hospitals and universities to create jobs offering family-sustaining wages for residents in surrounding low-income neighborhoods. As worker-owners, Evergreen employees share in the profits of the company and have access to special programs to help them purchase homes, allowing them to build wealth rather than live paycheck to paycheck. 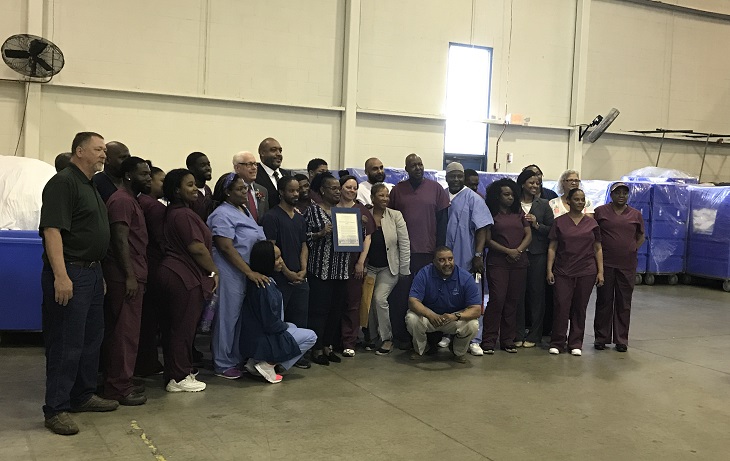 Evergreen Cooperative Laundry employees and stakeholders pose for a picture with a copy of Cleveland Mayor Frank Jackson’s proclamation celebrating the announcement.

The Road to Success

There have been plenty of challenges launching and building these enterprises, and success hasn’t come overnight. But the cooperatives continue to grow, and big contracts – like the one announced with the Cleveland Clinic this week and another recently made between Green City Growers and Nestle – have boosted the momentum and impact of these enterprises. The Cleveland Foundation has invested nearly $10 million in the initiative so far, and we’re excited to see our support translate into life-changing impact for Greater Cleveland residents.

Today, the Evergreen Cooperatives employ some 220 individuals; 43 employees are worker owners, 31 are re-entry and 20 have become homeowners since starting at Evergreen – including 11 of the re-entry employees. These numbers may sound relatively small, but they translate to a wider financial impact. Gross wages, payroll taxes, health benefits, training and distributions to workers and management since 2010 total more than $16.2 million. More than $737,000 in property taxes have been contributed from Evergreen-owned properties – including the Green City Growers 3.25 acre hydroponic greenhouse in the heart of Cleveland’s Central neighborhood, which supplies fresh produce to Greater University Circle hospitals and universities as well as restaurants across the region.