Greater Cleveland Regional Transit Authority (RTA) riders can now enjoy an even closer view of world-class art inspired by the Anisfield-Wolf Book Awards cannon as Phase II of INTER|URBAN has been unveiled as part of Cleveland Book Week 2018! 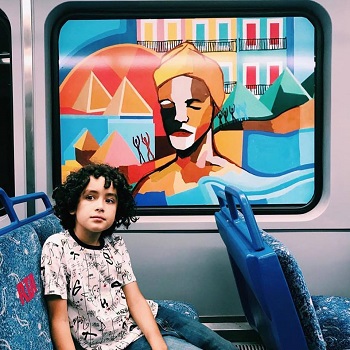 Completed ahead of the 2016 Republican National Convention in Cleveland, the first phase of INTER|URBAN included murals, photographs and installations along the train tracks of the RTA’s Red Line, which connects downtown Cleveland with Hopkins International Airport to the west, and University Circle to the east. This second phase of the project brings the art onboard the train cars, giving riders a more intimate and prolonged interaction with the art. We’re proud to have supported INTER|URBAN, a collaboration between the RTA, LAND Studio, the Anisfield-Wolf Book Awards and the Cleveland Foundation.

For Phase II, 25 artists – most of whom call Northeast Ohio home – were chosen from more than 200 applicants to create works inspired by five Anisfield-Wolf Book Award winners: The Negro Speaks of Rivers, by Langston Hughes; The Warmth of Other Suns: The Epic Story of America’s Great Migration, by Isabel Wilkerson; The Fortunes, by Peter Ho Davies; Far From the Tree, by Andrew Solomon and The Gay Revolution: The Story of the Struggle, by Lillian Faderman. Their art has been installed on 25 Red Line train cars.

If you haven’t already, we encourage you to ride the Red Line and experience INTER|URBAN for yourself. Learn more about the project in this short film, which premiered to the audience at the 83rd Annual Anisfield-Wolf Book Awards Ceremony on September 27: