Give Login Contact Search
In the Community / COVID-19 Response / Stories of Impact: PCs for People aims to create a more connected community

The digital divide in Northeast Ohio predates the pandemic. In recent years, Cleveland has been ranked among the worst internet-connected cities in the United States. According to the American Community Survey, more than one in five households in Cuyahoga County have no internet access of any kind, with more than half of Cleveland households that make less than $20,000 completely disconnected from the digital world. Additionally, more than half of Cleveland seniors over the age of 65 have neither a home computer nor internet access. 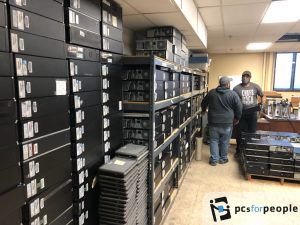 In an environment where virtual is often the only option, many people are at risk of being left behind. PCs for People is striving to close the connectivity gap in Northeast Ohio, and in the wake of COVID-19, its mission feels more critical than ever.

The pandemic has illustrated how connectivity touches practically every essential activity, and it has illuminated weak spots in our internet infrastructure, according to Bryan Mauk, executive director of PCs for People’s Cleveland branch.

“We used to lean heavily on libraries and schools, but once you take those things away, you see how fragile the infrastructure in the community really is,” Mauk said.

The Cleveland Foundation helped bring PCs for People to Greater Cleveland in 2018 as part of the $488,000 grantmaking effort that launched the foundation’s Digital Excellence Initiative. It is also an active partner of the Greater Cleveland Digital Equity Coalition established by the Cleveland Foundation in 2020 along with the Digital Equity Fund to help address Northeast Ohio’s digital divide. With locations in Ohio, Minnesota, Colorado, Maryland, Missouri and Illinois, PCs for People provides low-cost computers and wireless hotspots as well as flat-fee tech support and digital literacy training to help residents get—and stay—connected. It has distributed more than 115,000 computers, subscribed 96,000 families to low-cost internet, and recycled 7 million pounds of electronics across the country.

Demand for PCs for People’s services skyrocketed in Northeast Ohio as COVID-19 forced closures of commonly used public internet spaces like libraries and schools. In 2019, the organization put 2,600 computers into the community along with around 1,100 hotspots—compared to 8,000 computers and 7,000 hotspots in 2020.

Hotspot demand has been so high that PCs for People actually hit what Mauk and his colleagues had always considered a hypothetical cap on the number of devices they could issue by law. So, to keep connecting more Ohio residents, the organization is currently working on building their own 4G LTE internet towers, with pilot projects running in three Ohio counties: Cuyahoga, Summit and Logan. 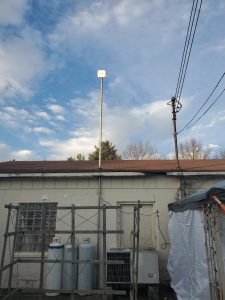 PCs for People has launched a pilot project building their own 4G LTE internet towers to connect Ohio residents.

“We have families waiting right now, so we needed something we could deploy quickly,” Mauk said. “The towers are improving speed for our subscribers in those service areas and allowing us to redeploy hotspots to other areas of need.”

With occupancy limited at its Cleveland storefront to adhere to social distancing guidelines, PCs for People is also working closely with libraries in Greater Cleveland and across Ohio to distribute computers and hotspots to the community.

While computers and internet are clearly essential, the tools of connectivity are only part of the issue, according to Mauk. Of the 15,000 Ohio residents PCs for People served in 2020, 47% had never owned a computer before, highlighting the need to build digital literacy to truly bridge the divide.

“COVID has accelerated the adoption of online everything—shopping, paying bills, ordering food,” Mauk said. “People are being pushed rapidly into this digitizing society, so we have to make sure they have what they need to use the technology comfortably.”

Ramping up digital literacy efforts will help create a better-connected Northeast Ohio that will continue to thrive after the pandemic. “Society is changing super quick, and the people with resources are able to adapt, but the people without can be left behind. We have to bring everyone along in this,” Mauk said.

Want to help? Visit PCs for People online to learn how you or your company can donate computers and equipment, or donate to the Greater Cleveland Digital Equity Fund.

More in COVID-19 Response, Digital Excellence Initiative, In the Community