Love and acceptance filled the streets of Greater Cleveland as the city commemorated Pride in the CLE in person for the first time since 2019. Every June, the LGBT Community Center of Greater Cleveland organizes a march and hosts a free festival to advance tolerance and inclusion, as thousands celebrate with fellow community members. 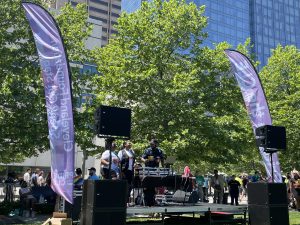 The Speak Out Stage at Pride in the CLE featured activists, organizers, poets and artists speaking to attendees.

Nationally, Pride is celebrated to commemorate the Stonewall Riots, which occurred at the end of June 1969. To honor the brave LGBTQ+ members who stood against harassment and injustice, the first Cleveland Pride was hosted in 1989. The city’s Pride would add a march and parade the following year.

On Saturday, June 4, 2022, an estimated 30,000 people gathered in Downtown Cleveland to commence the Pride march. The march kicked off at noon in front of Cleveland Public Library as spectators lined the route under the sunny skies. The march wound around Public Square and W. 6th Street before ending in Lakeside Avenue at Malls B and C, where the rally took place. 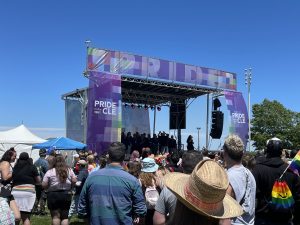 Pride in the CLE featured performances from several local and established drag queens and a health and wellness village.

The Cleveland Foundation was proud to join the Pride march and sponsor the Speak Out Stage on Mall B, which offered a space for members of the community – activists, organizers, poets, artists and others – to speak to attendees. Kicking off the Speak Out Stage program, Cleveland Foundation Program Officer for Grantmaking Initiatives Andrew Katusin spoke about the foundation’s commitment to human rights, saying, “Philanthropy translates to mean the love of humankind. At the foundation, we also interpret this to mean the love of ALL humankind. Everyone.”

This year’s Pride in the CLE represented a groundswell of hope and progress in our community, especially as anti-LGBTQ+ legislation and harmful rhetoric have made headlines across the country.

“Right now, we need to come together as we continue to see hateful legislation and rhetoric that puts everyone in our community at risk. [Pride] is the space where we can come together and unite to support human rights, civil rights and our space and community together as we speak up and speak out,” said Katusin.

Overall, Pride in the CLE was a lively celebration with more than 150 community vendors offering their products, performances from several local and established drag queens, and a health and wellness village. The Cleveland Foundation is proud to not only have the opportunity to sponsor this amazing event but participate in the Pride march to call for change and inclusion. 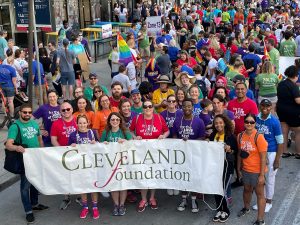 Cleveland Foundation staff members and their families participated in the 2022 Pride in the CLE March.

As the foundation aims to expand its strategic direction, we continue to be changemakers with the community to demand equal justice, eliminate harmful practices and ensure we meet the needs of all residents in Greater Cleveland.

Commemorate Pride with your community this June by participating in events hosted by local organizations around your neighborhood. The LGBT Community Center of Greater Cleveland continues its official Pride in the CLE programming on Saturday, June 11 with its Platform Pride Martian 5k Race. Starting in front of Platform Beer Company, runners are encouraged to express themselves in their best Pride colors. Learn more here.