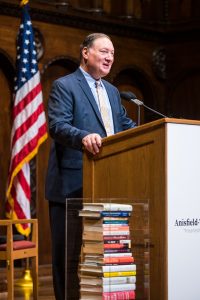 CLEVELAND – Cleveland Foundation president & CEO Ronn Richard has informed the organization’s board of directors that he intends to retire in the second half of 2023. Richard has been at the helm of the foundation since July 1, 2003.

The foundation has hired a transition consultant that will work with an ad hoc committee of the Cleveland Foundation Board of Directors to develop a CEO profile that will guide the committee in selecting the 10th head of the world’s first community foundation. No specific timeline has been set for the hiring of Richard’s successor.

“Ronn will leave a remarkable legacy as president and CEO of the Cleveland Foundation,” said Constance Hill-Johnson, chairperson of the Cleveland Foundation Board of Directors. “His term has been marked by a multitude of successes and achievements that have put us in a solid position, with strong programs and partnerships and a record endowment. Most recently, he has led the work to create a new headquarters for the foundation located in the heart of MidTown, allowing us to make an even greater impact on the city in alignment with our mission.”

Richard, who turns 67 on Jan. 25, will conclude his tenure as the second-longest serving head of the foundation, behind only Leyton E. Carter (1928-53).

“It has been the honor of a lifetime to lead the Cleveland Foundation for the past two decades,” said Richard. “I leave knowing our organization has worked with local partners to achieve transformational change and am confident the foundation’s future is bright thanks to a wonderful board, a marvelous staff, a record endowment and tremendous working relationships with local leaders in the public, private and nonprofit sectors. I’m also grateful to the foundation’s donors, who have allowed us to do so much for the community as a result of their generosity.”

Among the accomplishments during Richard’s time at the foundation are:

“Together, we have accomplished so much over the past 20 years, and I have no intention of slowing our momentum as I prepare to retire,” said Richard. “Before I pass the torch to my successor, I look forward to opening our new headquarters in MidTown and continuing our work across Greater Cleveland to promote innovation, prosperity and opportunity for the benefit of our entire community.”

Prior to heading up the foundation, Richard was managing director and chief operating officer of In-Q-Tel, the CIA’s venture capital fund. In this role, he worked to ensure the prompt and effective delivery of new technologies to the U.S. intelligence community.

From 1983 to 1988, Richard was a career U.S. Foreign Service officer, serving at the American Consulate General in Osaka/Kobe, Japan, and as a desk officer for North Korean, Greek and Turkish affairs, respectively, at the U.S. Department of State in Washington, D.C. He was also a Pearson Program fellow in San Francisco, where he researched and reported on U.S.-East Asian and U.S.-Latin American trade, investment flows and technology transfers.

Richard began his career as director of the national public affairs program service at the nonprofit Japan Society in New York City.

Richard is married to Bess Rodriguez, an artist and former U.S. diplomat, and has two children, Susanna and Nicholas. Nicholas recently passed the State Department’s Foreign Service Exam, with the goal of following in his parents’ footsteps in the U.S. Diplomatic Corps.