Scholars, Students and Suits mingled with artists last evening at a reception hosted by Cleveland State University to welcome Turkish playwright and director Özen Yula. Mr. Yula is here through the auspices of the Cleveland Foundation’s Creative Fusion, a unique grants program that supports long-tern residencies for international artists.

Mr. Yula will be in Cleveland through October this year, working with drama students at CSU, local artists at Cleveland Public Theatre, and with Cleveland Metropolitan School children through the CMSD’s All City Arts program.

Students at CSU willcreate and stage an original play via Mr. Yula’s ‘devised theater’ approach. The premiere is scheduled for this coming April at CSU’s Factory Theater. He will then work with local artists at Cleveland Public Theatre to create a new work of his own which will receive its world premiere on CPT’s mainstage season this fall. During this time he will also spend 10 weeks in the Cleveland schools working with talented students from across the district.

Özen Yula’s work has been staged at major theaters around the world and translated into more than a dozen languages. The focus of his work aligns well with Cleveland Public Theatre’s social justice mission. His plays dealing with human rights, social issues, and injustice have sometimes created controversy when performed in restrictive and conservative societies.

At the reception at CSU last night, Liberal Arts and Social Sciences Dean Greg Sadlek, and Michael Mauldin, director of dramatic arts, both commented on the power of the arts and theater in particular to ask the hard questions of society and push toward higher levels of human development. Taking the opportunity to provide some instruction, Professor Mauldin noted that the Greek term ‘didaskalis’ which forms the basis for our own ‘didactic,’ in ancient Greece referred to the theater, specifically, the playwright as a teacher.

Özen Yula made some heartfelt remarks to close the formal part of the evening, talking about how glad he was to be here and to undertake this work. He grew up in a small city in Southern Turkey, although he lives sometimes in Istanbul, a city of more than 15 million people. He said he was very comfortable in Cleveland. “Cleveland is a small city. My home is a small city which I carry with me always. I will carry Cleveland with me always too.” 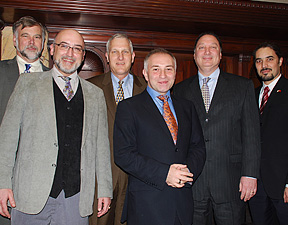 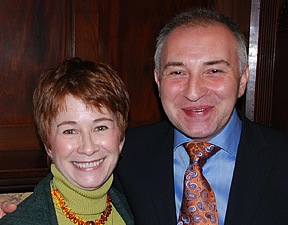 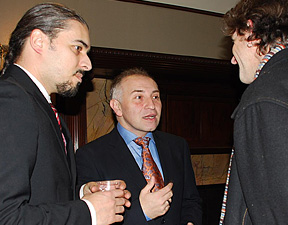