Give Login Contact Search
At the Foundation / Grantmaking / Advice From Grantees

Since that time more and more nonprofits and foundations have started using it (including @CleveFoundation). On the other hand, many folks are still shunning this technology. One of the benefits I’ve discovered is the ability to quickly share and access information. While I have come to love Google Reader (and will post a blog about that soon), as a way to sift through a lot of information, I still find Twitter ideal for speed. 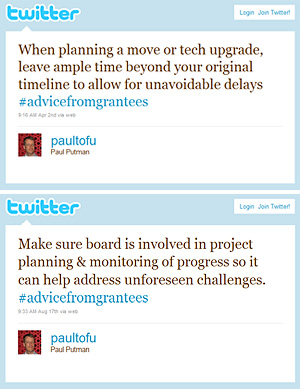 Folks who aren’t using Twitter in the nonprofit/philanthropy arena often mention two barriers: 1) a lack of time – especially lacking time to “read about what people ate for breakfast” or other trivial items, and 2) not being able to locate quality information. A lot of the barriers can be removed by limiting the people you follow to only those who share quality information and by organizing your time online. Hashtags are another answer to those concerns.

Similar in concept to tagging photos, the hashtag (indicated by the “#” prior to the other characters) is simply a way to categorize information. By including it as part of a tweet, it is possible to easily pull up tweets that include specific information. Hashtags are used to categorize all tweets (including those coming from multiple people) from a particular conference, for example, or to categorize tweets in other ways.

As part of the foundation’s ongoing efforts to share what we learn from our research (which I share through my general Twitter posts at @paultofu) and from grant reports, I have been using the Twitter hashtag #advicefromgrantees. In an effort to protect grantee anonymity while sharing some key insights, I send out occasional, quick, bite-sized morsels of information or advice from area nonprofits.

The tweeted information is pulled anonymously from the “What advice would you give to other organizations planning a similar program? What would you do differently if you had the chance?” section of the grant reports we receive.

We’re hopeful that some of the tweets will provide reminders or new information to help other nonprofits. Other foundations can also use the hashtag to share information. If you are not using Twitter you can also use a Google Search to find those specific #advicefromgrantees tweets.