Give Login Contact Search
At the Foundation / Grantmaking / How I Spent My Summer: David Campbell 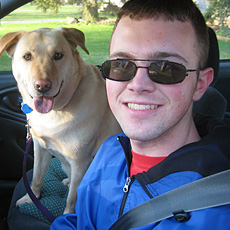 When most people think of vital services to the community, public transit usually is not the first thing that comes to mind. However, for the millions of people that rely on public transit to get to work every day, it is a necessity. With the rising prices of gas and parking in Cleveland costing up to $12 a day, people are spending a large percentage of their income on their daily commute. In a struggling economy, this is becoming a large problem for many households. Fortunately, the solution to this problem is simple: ride RTA. RTA offers affordable transportation to anywhere you need to go in the Cleveland area including work, school and your favorite restaurant.

During the internship, I have helped with RTA’s Ready to Ride program, learned about all of RTA’s facilities, wrote articles for newsletters, was the photographer at RTA’s events, and so much more.During the middle of my internship, we started preparing for the filming of The Avengers movie in Cleveland.During this time, I worked with RTA staff to find ways of informing people about the road closures and bus reroutes.This was the time where RTA really shined. All of the departments got together and were able to come up with an effective plan despite all of the uncertainties about filming schedules. I am proud to have been at RTA this summer and work with an amazing staff that puts the needs of the public first in their minds.

This internship has been an incredible experience and I would like to thank the Cleveland Foundation staff for this amazing opportunity and everyone at RTA for allowing me to work with them this summer.I would also like to thank my fellow interns for teaching me so much about the nonprofit and public sectors and helping me grow as a young professional.It was an honor to have met such an outstanding group of individuals.I wish them luck on their future endeavors.

Each week we use this space to give each of our interns a chance to reflect on their internship experiences. David is a senior at Cleveland State University. Placement: Greater Cleveland Regional Transit Authority (RTA)