Give Login Contact Search
In the Community / Arts & Culture / Common Thread, Cleveland to Cuba: A Commitment to Place 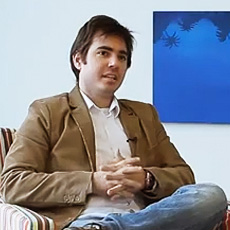 Alex Hernandez Dueñas is one of five Cuban artists who have been in residence in Cleveland since late last year. Brought here by the Cleveland Institute of Art (CIA) under the Cleveland Foundation’s Creative Fusion program, Alex and the other artists have been making art and lecturing about Cuba – its art and history – in various venues around Cleveland.

When I met with Alex during an exhibition of his work in his studio at CIA, I asked him what his impression of Cleveland was and what he will remember most from his time here. He said the most interesting thing. He was deeply impressed with the Clevelanders he met who loved this city and were committed to stay here and make things better.

“It’s like many of the people in Cuba,” he said. “Many people left because they didn’t agree with the way things were. And many people have left Cleveland. But many have stayed here – or come back. Many people stayed in Cuba because we loved the place and wanted to do what we could to make it better.”

His work may at first appear as merely very beautiful and technically exceptional. But I have learned that all Cuban art is political. Although Alex is young, and was not around when the Castro regime came to power, he lives in a world where the Cuban image of America is stuck in the 1950s. His paintings reflect that Cuban dream of Miami as almost a Hollywood set of the privileged class: swimming pools abound and perfectly manicured lawns surrounding clean, modern houses and constant sunshine. The work comments on the isolation of Cubans and their lack of awareness of the current realities of American life

Earlier this year a video work of Alex’s was featured in an exhibition at the Museum of Contemporary Art here, as part of a collaboration between CIA and MOCA through the Creative Fusion residency program. It featured a Cuban man painstakingly carrying bucket after bucket after bucket of water up many flights of stairs in order to fill a bathtub so he could take a bath. It commented on both the lack of amenities, such as running water, for most Cuban people, but also on the great dignity of people who will do what it takes to be, and respect themselves as civilized human beings. It is a beautiful film.

In addition to producing a large volume of work while here – much of which will be exhibited in the prestigious Havana Biennial – Alex and his fellow artists have spent as much time as possible on the Internet. With little to no access to the Internet at home, the Creative Fusion residencies have provided a rich and rare research opportunity for the Cubans.

Alex has just left us but two other Cubans will remain in Cleveland through March: painter José Ángel Toirac Batista and his art historian wife, Meira Marrero Díaz. I look forward to sharing more of their thoughts and impressions in the weeks to come.