Cheikhou Ba, from Senegal, was the quietest of our Fall 2013 Creative Fusion artists – but only in his speech.  His work spoke very loudly indeed, and his presence made a profound impression on all those he touched – especially the young people with whom he worked during his residency here.  Even Cheikhou’s name – which we all struggled to pronounce properly out of respect for him (Shaykhoo is as close as I can come in American English and that’s not quite right) – bespoke the gentle, thoughtful and sweetly generous spirit he brought to all his encounters. 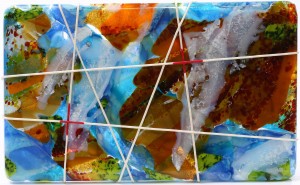 I remember at the closing dinner we host for our artists, Cheikhou stood with the beautiful, handmade cast-glass award we present to each artist that represents the continents of the world crossed by the trade routes and flight paths artists travel to share their cultures, and said he wished he could break it in pieces to share with everyone he worked with while here.   It was a very moving and heartfelt moment. 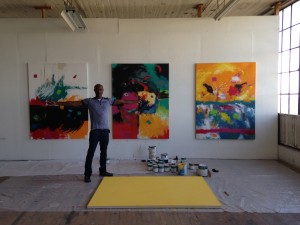 But his paintings – amazing work: large, incredibly colorful canvases, linked to a body of work he calls the Mouth of Freedom and which he has been pursuing for some time, now, based on the writings of  Martinique poet Aimé Césaire’s in his “Notebook of a Return to the Native Land” (Cahiers d’un Retour au Pays Natal); “My mouth shall be the mouth of those calamities that have no mouth, my voice the freedom of those who break down in the prison holes of despair.”


Identity is a central concern for Cheikhou, who spends half his time in Dakar, Senegal and half in Geneva, Switzerland, with studios in both countries. He is an international artist and citizen with deep concern for the planet and its diverse people and cultures. His resume is incredibly impressive, with solo and group exhibitions around the world. http://www.cheikhouba.com 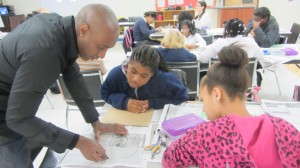 With the young women of the Cleveland’s Sisterhood program, he explored the issue of identity – so important for young people, and in particular young people who must find themselves in a world sometimes absent the guidance of a caring family. With these young women he encouraged them to express the often dual nature of their personalities, the face we show others and the face we keep hidden.

Cheikhou’s artist statement from his exhibition at Waterloo Arts for the close of his residency says much about an outsider’s experience of our city and carries a gentle but pointed  message to not only the people here, but for our Mayor as well.

I have come to love this beautiful city of Cleveland and dream of seeing more underrepresented people reaching galleries, museums and theaters. I would like to go to the football game and not see the people reduced to the demeaning task of serving others, as the vendors of beer and sandwiches. I dream of a united and solid city.

We will miss Cheikhou’s quiet dignity, his deep caring, and his brilliant smile, and what he taught us about people being greater than the sum of their parts.