Give Login Contact Search
In the Community / Arts & Culture / An Introduction to the Creative Fusion 2014 Fall Class: Dale Yudelman

This is the sixth in a series of ongoing blogs introducing you to our new artists. 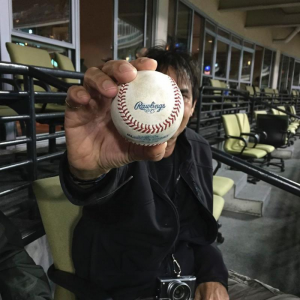 Dale, a photographer from Cape Town, South Africa, lived in Los Angeles for 10 years, so it didn’t take him long to master driving on the right side of the road again! Since arriving in Cleveland, he has hit the streets, reacquainting himself with American culture and exploring Cleveland through the lens of his camera. As Dale absorbs the many facets of our ‘Rust Belt Metropolis,’ he is capturing images that will be exhibited at the Waterloo Arts gallery, beginning November 7.

Some of these experiences have included: atending a 9/11 memorial service; exploring downtown and getting to know the regulars of Public Square; enjoying the sea of colors and talented artists at the Cleveland Museum of Art’s Chalk Festival; mingling with Collinwood neighbors on the shores of Lake Erie; photographing the crowds outside the Apple Store awaiting the latest iPhone release; bowling with his fellow Creative Fusion artists at Mahall’s (OK, so he only took a couple shots at the pins before he was behind the lens again!); shopping therapy at the Cleveland Flea; getting to know the CLE art scene with a tour of The Print Room; artist talks at Waterloo Arts and Zygote Press; the Tremont Art Festival; 78th St. Studios’ Third Friday openings; checking out the armor collection at the Cleveland Museum of Art; brunch at the Beachland Ballroom; a stroll through Coventry Village; an amazing concert at the House of Blues; and seeing the Tribe on a gorgeous Fall day. It’s tiring just reading the list!

Besides capturing all things Cleveland, Dale is busy exploring some additional project ideas for his residency, meeting other Cleveland photographers and arranging presentations of his work at local schools and universities. One of his favorite discoveries has been the smorgasbord of vegetarian fare Dale found at Whole Foods Market!