Give Login Contact Search
In the Community / Arts & Culture / An Introduction to the Creative Fusion 2015 Spring Class: Alexandru Patatics

Once again we are privileged to welcome an amazing group of international artists into our community. Clustered from two geographical locations – South America and Eastern Europe – these six artists have already formed a strong bond with each other and with aspects of the Cleveland art scene. As you will see from their first few weeks here, they have enbraced the cold, the city, our cultural institutions and many of our young people already. We can’t wait to see what will come over the next two months.

This is the fourth in a series of ongoing blogs introducing you to our new artists. 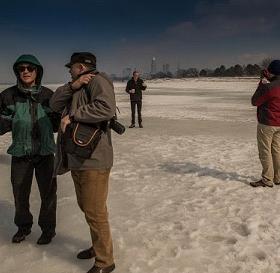 Since beginning his residency, Alexandru has been initiating collaborative projects with local art institutions and planning his work for the duration of his Creative Fusion residency. Alexandru recently met with Bruce Checefsky of the Cleveland Institute of Art, where he will be presenting to students later in the semester.

During his Creative Fusion residency, Alexandru will primarily focus on presenting a multi-screen video film installation. As a secondary project, he would like to remake a work of Polish filmmaker Krzysztof Kieślowski’s entitled “Talking Heads.” In his free time, Alexandru embraced the Cleveland winter by taking a walk on frozen Lake Erie, where he enjoyed coffee from a temporary café constructed on the ice!