Give Login Contact Search
At the Foundation / Events / Takeaways from YPCLE: The Millennial Caucus

The day began with a panel conversation featuring Cuyahoga County Executive Armond Budish, City of Cleveland Mayor Frank Jackson and our President & CEO Ronn Richard. The panelists shared wisdom and advice for young professionals and discussed key community issues for the next generation of Greater Cleveland’s leaders. Their conversation ranged from the importance of high-quality universal Pre-Kindergarten education, to strengthening the tech industry in Greater Cleveland, to important character traits like authenticity and humility in emerging leaders.

Building on conversations begun at the Greater Cleveland Caucus Town Hall event in March, the Millennial Caucus transitioned into breakout sessions where attendees took a closer look at three Caucus topic areas: Housing & Neighborhoods, Inclusion: Population & Demographics and Jobs & Economy. Each breakout session began with a brief presentation by an emerging leader working in the field. Each presenter posed a discussion question to attendees, asking them to generate ideas to achieve a particular goal for Greater Cleveland’s future.

Kicking off the Jobs & Economy discussion, Evan Ishida of Thrive at Work asked how we can foster positive change in Greater Cleveland by improving people’s experiences and engagement in their work environments. Leading the Housing & Neighborhoods discussion, Khrystalynn Shefton of the Famicos Foundation asked how can encourage millennials to move from being renters to homeowners in the city of Cleveland. For Inclusion: Population & Demographics, Jazmin Long of Global Cleveland asked how we can promote a welcoming environment to attract and retain immigrants to Greater Cleveland. 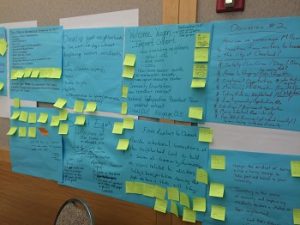 All the ideas and action items generated in these breakouts sessions were collected, and we’re excited to explore them in greater detail. Stay tuned – we’ll be sharing them here soon!

We invite you to follow the Greater Cleveland Caucus Series as it continues throughout the year and register to attend upcoming events right here.

More in Events, In the Community, Strengthening Cleveland