This post is from our partners over at CAN Journal. Written by Karen Sandstrom.

Freedom is a big deal to Michela Picchi. The Italian-born artist lives in Berlin, travels as she can, and though she made a name doing illustrations for big clients, what she wants most now for her art is to be free of restrictions.

That’s why she painted a flying tiger on the side of a building on W. 28th Street and Detroit Avenue. “It’s a bit playful,” she says. “I feel free here a lot, so it’s really connected to how I feel.”

Picchi is part of the fall cohort of visiting and local artists through the Cleveland Foundation’s Creative Fusion program.

Hosted during her visit by SPACES, Picchi arrived Aug. 31 and took up work and residence in Hingetown. She went to work quickly on the mural — about 130 feet wide by 16 feet high — depicting the tiger with a length of starred flag in its mouth and a pink-feathered bird fluttering just up ahead.

The size of the “canvas” itself was part of the lure; Picchi has painted a couple of VW microbuses and some smaller murals, but nothing of this scale or shape. “Usually I don’t work so horizontally,” she says.

Some muggy weather and long, hot days early on made work on the scaffold pretty tiring. But Picchi’s experience in Cleveland has exceeded her hopes.

“I didn’t expect people to do be so kind, like 100 percent, every day,” Picchi says. When I’m painting, I’m on the street, they interacted with me from the first day, every day, every hour. They even stopped their cars and came over and photographed me. People are responding in a really great way.”

Picchi also has studio space above Rising Star Coffee, where she churns out smaller canvases that pop with color — a disciplined palette that makes her work instantly identifiable a quarter-mile away. “I’m happy that I can do this, that I can paint – that for me is really important,” she says. 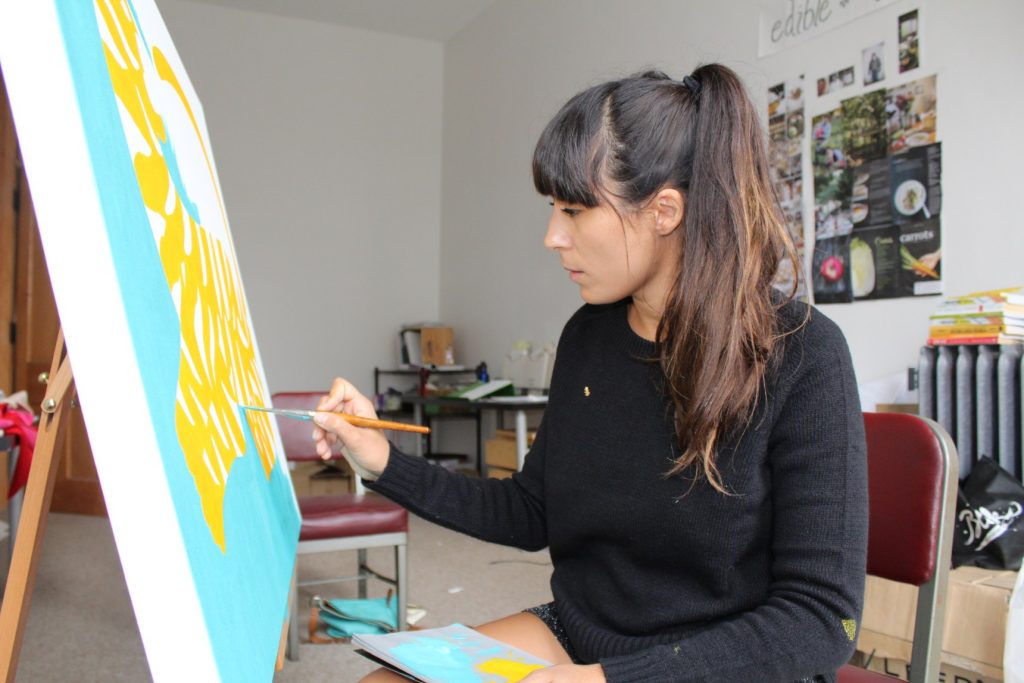 Besides making work, Picchi has taught two workshops for teenage detainees at the Cuyahoga County Juvenile Detention Center. Her visits are part of a larger program SPACES has with the center thanks to funding from the NoVoFoundation Social and Emotional Learning Innovation Fund. Picchi is one of several artists working with teacher Melissa Marini Švigelj-Smith at the center to give art experiences to students there.

Michelle Epps, community engagement manager at SPACES, says Picchi’s workshops were “particularly special, since the students were exposed to someone of an entirely different culture than themselves. Ms. Smith prompted the students by having them watch a video on Italy and they were then able to ask Michela questions about her life there. The students were also particularly interested in Michela’s corporate work with companies like Nike and her street art.”

“I went there with no expectations,” she says. “Actually, I was afraid they wouldn’t want to join. I just explained to them where I come from. I showed them this is Rome, but I showed them I’m from the suburbs. It’s not the best suburb where you want to grow up. It’s a bit rough, and I had a lot of friends in jail, so I just tried to explain to them that I wanted to escape from there. It’s my home, but at one time I just decided I had to push my energy in another direction.”

The workshops stayed focused on art. Picchi says her directive was not to talk to the students about what they’d done to be sent to the detention center. Still, she gleaned impressions from what they painted.

“For me, it’s psychologically interesting to see what they do,” she says. “It’s as if they’re still stuck in childhood even if they’re 17. I think they need to live that; they’ve grown up too fast.

“Some of them are outstanding,” she says. “I just give them my color palette plus black and white, or I say just do your own color palette. I want to give them total freedom.”