Questions? Get in Touch

Since 2008, the Cleveland Foundation has brought more than 90 accomplished or rapidly rising artists from around the world to Cleveland as part of an international arts residency program. Each year, artists from Creative Fusion cohorts are hosted by local cultural institutions during a three-month residency.

As part of the lead up to the 50th anniversary of the Cuyahoga River catching fire on June 22, 1969, the Cleveland Foundation’s Creative Fusion: Waterways to Waterways Edition will bring together a group of six international and six local artists to focus on projects that connect the regenerative efforts for the Cuyahoga to global waterways. This two-pronged initiative will incorporate works that artists are doing in other parts of the world that inspire continuing progress in Cleveland and around the globe while providing lessons Cleveland can share with the rest of the world about how to revive and reimagine a river. Creative Fusion: Waterways to Waterways Edition artists include:

Check out the news release on Creative Fusion: Waterways to Waterways Edition.

Hosted in partnership with Cleveland Neighborhood Progress (CNP), Hack Cleveland (HackCLE), ThirdSpace Action Lab, and DigitalC, Creative Fusion: Data Edition brings together three international and five Cleveland-based artists to focus on new ways to use and visualize Greater Cleveland neighborhood data through art. The artists will challenge us to think differently about who we consider to be an artist, a data scientist and/or an activist. Creative Fusion: Data Edition artists include:

Presented in partnership with the Cleveland Museum of Art’s longstanding, year-round performing arts series, this Creative Fusion residency brings six diverse composers from around the world to the Cleveland Museum of Art, where they will draw inspiration for original compositions to be performed in Cleveland over the next two years. During their time in Cleveland, the composers will immerse themselves in the city and the museum’s collection.

Learn more about these composers and the Creative Fusion: Composer Series residency here.

In collaboration with FRONT International: Cleveland Triennial for Contemporary Art, the fall 2017 Creative Fusion cohort includes local, national and international artists who will live and/or work in the newly developed PNC Glenville Arts Campus as they research projects that will be unveiled as part of the inaugural FRONT Triennial, titled An American City. During the residency, the artists have the opportunity to work closely with city institutions, interact with the local community and explore Cleveland. The Madison Residency program is named in honor of Robert P. Madison, Ohio’s first licensed black architect and designer of the residency building at the Glenville Arts Campus. Madison Residency artists include: 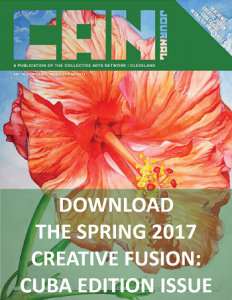 Read about the 2016 Creative Fusion Hingetown project here, and see the murals here.