Last week, we celebrated the official opening of the PNC Glenville Arts Campus! Located at 1464 East 105th St. in Cleveland, the campus comprises two newly restored buildings: The Madison, which features meeting space and apartments designed to house artists-in-residence, and the FRONT Porch, a public forum and community gathering space. 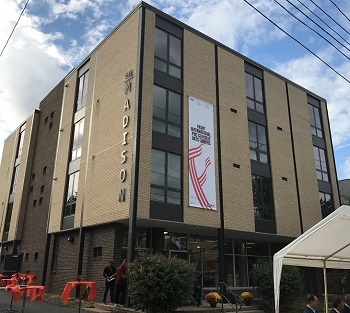 The Glenville Arts Campus was developed to accommodate artists participating in the inaugural FRONT International: Cleveland Triennial for Contemporary Art, which will run July 14-Sept. 30, 2018, but was also designed to endure beyond the Triennial as a permanent improvement to Cleveland’s Glenville neighborhood.

Named in honor of Robert P. Madison, who originally designed the building in 1962 and was Ohio’s first licensed African American architect, The Madison historically housed black doctors who could not rent space to practice elsewhere. Now, the building will continue to promote inclusion while providing a service as a residential and public meeting space for artists. 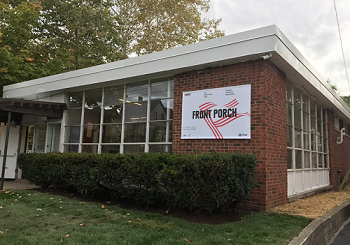 Formerly a daycare adjacent to The Madison, the FRONT Porch will now serve as a site for community programming and a public meeting place, where artists can engage with the local community through performances, film screenings, events and activities.

To activate the newly developed PNC Glenville Arts Campus, FRONT has invited six international, six national and six Cleveland-based artists to live and/or work at the campus as they research projects and prepare for their role in the 2018 FRONT Triennial.

Our Support for the Project

We’re proud to have supported the FRONT Madison Residency as part of our Creative Fusion artist exchange program. In addition to financial support for visiting international artists and local artist partnerships, we provided a major operating grant to support FRONT, along with a $350,000 capital grant to Famicos Foundation to make the campus development in Glenville possible. We also recently announced a $50,000 grant to the Collective Arts Network (CAN) Journal to organize a companion triennial to FRONT that will focus exclusively on artists based in Northeast Ohio.

“The Cleveland Foundation has long focused on the vital role of the arts in our community,” said our President & CEO Ronn Richard. “The arts campus in Glenville is the embodiment of the vision we’ve developed with partners for how our collective commitment to the greater University Circle area could help revitalize the surrounding neighborhoods. FRONT will solidify Cleveland’s reputation as a global arts destination, and we’re proud to align our Creative Fusion international artist residency initiative with the inaugural edition of the triennial.”

We’re thrilled to see the vision of this beautiful new campus realized, and we look forward to welcoming artists to the space next year!