Give Login Contact Search
In the Community / Arts & Culture / #CLExHAV: Behind the Scenes of the Cleveland Havana Ballet

Building on a collaboration that began as part of our spring 2017 Creative Fusion: Cuba Edition international artist residency, Verb Ballets of Cleveland and ProDanza of Havana have taken their partnership a step further to form the Cleveland Havana Ballet, a temporary merging of the two companies to produce the full-length Cuban ballet Yarini. We’re proud to have supported this unique collaboration with a $50,000 grant to Verb last year. Earlier this year, Verb traveled to Havana to rehearse and perform Yarini together with ProDanza as the Cleveland Havana Ballet. In this guest blog, Verb Ballets dancer Kate Webb shares her reflections from this experience.

What do pointe shoes, dirt and cafecitos have in common? They’re all integral parts of the Cleveland Havana Ballet, which recently completed its successful first edition of international performances in Cuba. The fusion company is comprised of young, passionate artists from Havana-based ProDanza and from Cleveland-based Verb Ballets. 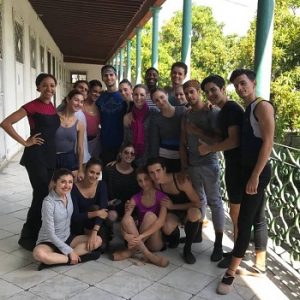 Dancers from Verb Ballets and ProDanza together in Cuba

After only dancing together for four days, the Cleveland Havana Ballet premiered Yarini, a full-length ballet based on a well-loved Cuban legend, in front of thousands of people. The two-country company followed up four shows of Yarini with three mixed-bill performances featuring repertory highlighting each of the dance troupes’ strengths. Despite the varying styles of the two companies – Verb Ballets is a contemporary ballet company while ProDanza considers itself strictly classical – by the end of the packed two-week residency, it was hard to tell which company each dancer worked for. They wore each other’s ballet skirts and company t-shirts, and began to emulate each other’s dance styles.

As a dancer, the exchange was both eye opening and rewarding. The Verb Ballets members were amazed by how the Cuban dancers could flourish in spite of countless daily obstacles. To make Cuban tap water drinkable requires iodine tablets, and this makes potable water – something we often take for granted in the U.S. – a valued commodity in Cuba. Most of the Cuban dancers would go without water for a full day of rehearsals in the non-air conditioned studios so they wouldn’t have to use up more tablets than absolutely necessary. I have never felt so thankful to have an otherwise mundane plastic water bottle. They also managed to perform jaw-dropping balances on pointe shoes that looked so mushy and worn that they didn’t provide an ounce of support. Yet they were able to execute endless turns on uneven, tattered and dust-covered floors. None of these trying conditions stopped them from dancing with vitality and spirit.

The non-dancing locals we met also showed us a lot about the ever-vibrant Cuban culture. Complete strangers would strike up conversations on the street and were delighted to converse about dance and art. The government subsidizes tickets to the ballet, just as it does tickets to the baseball game, so dance is something for everyone to engage in. It was surreal to be in a country where it was more likely that a person would understand a reference to Maurice Ravel’s Bolero over Jeff Bezos’ Amazon.

The Cubans have built a beautiful island where the classics are revered and the present moment is enjoyed to the fullest. With very limited internet access, Cubans understand the profound gratification that comes with slow, meticulous work. They take the time to appreciate attention to detail, and translate that appreciation to artists. Although we toured in a country with limited resources, every person with whom we interacted gave us unending admiration. I think it is safe to say that half of my heart is in Havana!

Read about Verb Ballets’ adventures in Cuba via: https://www.verbballets.org/cubatour/.