Give Login Contact Search
At the Foundation / Giving / Frank Jason Feola, Ph.D.: A Life Lived for Others and a Legacy that Lives On

Frank’s father, Frank Sr., tells a story from Frank’s high school days. A talented artist, Frank had the opportunity to tour Europe with Mentor’s Top 25 Show Choir. When a classmate fell seriously ill on the trip, Frank went out of his way to take care of him. The family later told Frank’s father that, if not for his son’s actions, their son never would have made it home.

Frank’s wife, Jen, remembers how welcoming he was when she met him during her first day on campus at John Carroll University. Frank invited her and a group of other students to join a softball game. From there, Jen and Frank became friends, started dating and eventually married and started a family. Jen also recounts a transformative moment in Frank’s college career when he took a service trip to Florida and worked alongside migrant workers. Originally planning to major in Finance and Economics, Frank returned from the trip and decided to change his major. “That experience changed something in him and he wanted to go into education,” says Jen. Frank became an English teacher and later went back to school to get his administrative license; he graduated with his Ph.D. 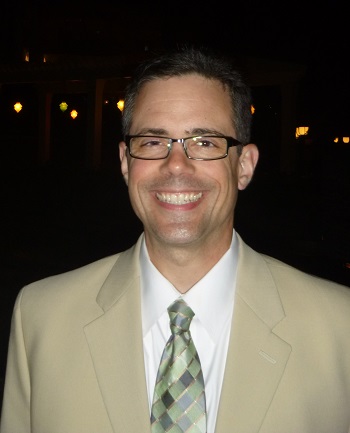 As manager of the Postsecondary Enrollment Options Program (PSEOP) at Cleveland State University – a program that helps Cleveland high school students enroll in college coursework – Frank mentored a student who was homeless. That student went on to earn a full scholarship to Harvard. Another student Frank guided, who also struggled with poverty, was awarded a full ride to Cornell. When telling these stories, Frank Sr. emphasizes that it was Frank and others who helped these students on the road to success. That’s how Frank would want it to be told.

And then there’s the story of Frank’s final days. On March 16, 2017, Frank was visited in his hospital room by his physician, oncologist and a resident. At age 40, after a 6-week battle with stage 4 renal cancer, they came to tell him there was nothing more they could do for him. Despite the unimaginable pain and heartbreak that come with that news, Frank responded with a message of gratitude and hope for the people who cared for him, “Thank you for telling me the truth.” Addressing the resident, he added, “I hope you have a great career.” Hours later, Frank passed away.

Those who knew Frank during his time on earth might have expected this kind of response. From the stories his loved ones tell – stories about his family life, career, passions, experiences and ultimately his death – a clear theme emerges: Frank Jason Feola was a man of strong faith and a man who lived for others. “He’s probably touched more lives than I can even imagine,” says his father, “through his living he cared about others and through his dying he cared about others.” 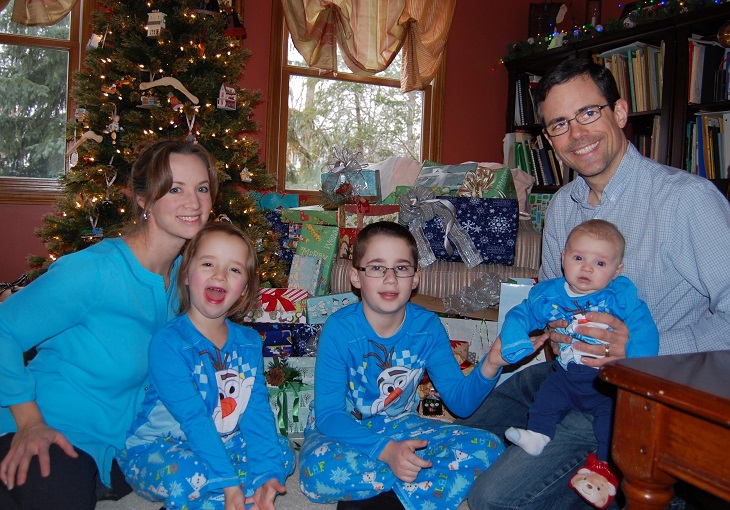 Of course, the people Frank left the greatest impact on are his family. During their 16 years of marriage, Jen and Frank welcomed three children: Frank, Elena and Daniel. Just five months before Frank passed, in October 2016, their youngest child was born. The next day, their pediatrician noticed a heart murmur. A blocked valve was depriving Daniel’s heart of oxygen. He spent three weeks at Rainbow Babies and Children’s hospital and underwent two catheter procedures. Three months later, Daniel’s oxygen levels remained low and the family prepared themselves for the likely possibility that their baby would need open heart surgery. They didn’t have much time to dwell on it though, because on February 6, 2017, Frank received his cancer diagnosis.

It’s hard to fathom how one family can be hit with such hardships simultaneously, but Jen believes the timing may not have been a coincidence. “After Frank was diagnosed, we were sitting at the kitchen table and he said, ‘I think I prayed to take Daniel’s pain, so he wouldn’t have to have open heart surgery.’” The day after Frank’s cancer diagnosis, Daniel had a follow-up heart appointment. His oxygen levels had begun to rise. At an appointment a month later, Daniel’s oxygen levels had reached 100%. Two days after that appointment, Frank died. Today, Daniel remains healthy and hasn’t undergone open heart surgery. Jen wonders if Frank’s prayer was answered.

A legacy that lives on

Shortly after Frank’s passing, his family knew they wanted to do something to honor Frank, but they weren’t sure where to start. A family friend, Jeff Roman, came forward to assist them. With Jeff’s help, the family established the Frank Jason Feola, Ph.D., Legacy Fund at the Cleveland Foundation. Establishing the fund has brought the family together in unexpected ways. 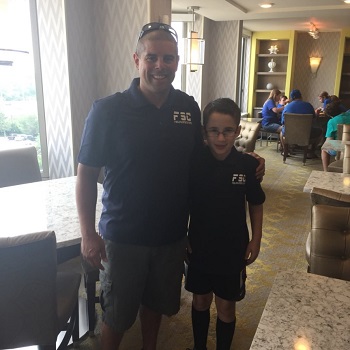 Little Frank and his Uncle Ryan

Before Frank passed, he and his oldest son Frank – known affectionately as “Little Frank” by the family – had started collecting football and basketball cards. It was a casual hobby, but something they enjoyed doing together. After Frank’s death, his brother Ryan stepped in to continue the hobby as a way to spend time with his nephew. “At first it was just about bonding with Little Frank,” says Ryan, “but then I decided it needed to be something more.” Soon, Ryan and Little Frank started “box breaking” and selling the cards to raise money for the legacy fund, and Ryan and his wife decided to match Little Frank’s donations. But it’s the relationship that Ryan and Little Frank have developed that is most rewarding. “It’s meant the world that Little Frank can call me and we can chat about the Browns or about school,” says Ryan. “It’s built an immense amount of trust, and at this point in his life, it’s important for him to have that.”


The Feola family hopes the Frank Jason Feola, Ph.D., Legacy Fund will continue Frank’s unfinished work and honor his lifelong passion to help people with their lives. Jen hopes the recipients of the money will be motivated by Frank’s example, “I hope Frank’s story will inspire them to also help others. To pay it forward.” Frank Sr. sees a profound lesson in his son’s example – one that he hopes others will heed: “He beat death. He defied death and he did it by thinking of everyone except himself.”