P.S. 162 John Golden in Queens, New York and Fairview Park in Ohio City (Cleveland, Ohio) are two neighborhood parks that hold a special place in my heart. At P.S. 162 in my hometown, I learned how to ride a bike, played tag and then handball, and simply hung out. It was the neighborhood backyard. Later in life, Fairview Park in Ohio City served as an extension of my house. My son and I spent a lot of time there. No weekend was complete without a visit to this park. The park was well programmed with ice-cream socials and plays that brought folks together. This park was my ‘gateway’ to the neighborhood’s civic pulse. In both instances, these neighborhood parks provided a clear function: they contributed to my social, physical and mental health. Both were an easy 10 to 15-minute walk from my front door.

The Case for Neighborhood Parks – By the Numbers

It is fair to say that as a nation we are in a health crisis, particularly in the United States. Among the chief contributors to this is physical inactivity, which results in a whopping 11% of all deaths. I repeat: 11% of all deaths. The good news? Public parks and green spaces can be part of the solution.

The RAND Corporation and City Parks Alliance, with help from the Trust for Public Land, led a National Study of Neighborhood Parks to understand to what degree parks encourage people to be physically active. Over a two-year period, researchers looked at 174 neighborhood parks in 25 cities – some real, hard science here. These are just a few of the findings and recommendations from that study: 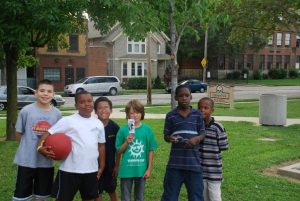 The study underscores the fact that thoughtfully designed parks can have a real and beneficial impact on our behaviors.

Particularly for young people, access to safe and enriching outdoor spaces can transform lives for the better. The field of philanthropy continues to see the connection between play and child development. And at a global scale, even the United Nations gets it. The UN Convention on the Rights of the Child states, “That every child has the right to rest and leisure, to engage in play and recreational activities appropriate to the age of the child and to participate freely in cultural life and the arts. That member governments shall respect and promote the right of the child to participate fully in cultural and artistic life and shall encourage the provision of appropriate and equal opportunities for cultural, artistic, recreational and leisure activity.”

So, What Are We Doing About It?

Here in Cleveland, our community has benefitted from the passionate individuals and organizations working to ensure every resident has access to enriching outdoor spaces. Sometimes this work happens on a grand scale, such as the establishment of the Cleveland Metroparks in 1919, and other times it’s a matter of neighbors coming together to transform a vacant lot at the end of their street. It makes me smile to think that the Cleveland Foundation’s very first discretionary grant was to help the City of Cleveland and the Cleveland Board of Education (now the Cleveland Metropolitan School District) keep open playgrounds that otherwise would have operated on limited summer hours because of lack of funds.

Nearly 100 years later, this work continues in our community. Here are some examples of our partners’ work in this area:

Parks have a real public benefit, but for those of us who have enjoyed the use of a good neighborhood park, it’s also deeply personal. I invite you to take a moment to think about a park that played a role in your own life. Personally, my neighborhood park played a prominent and enduring role in my sense of place. Professionally, I find myself assessing neighborhoods on the quality of their parks – not just by their housing stock and commercial corridors.

Now tell me about your neighborhood park…

Nelson Beckford is Program Director for Neighborhood Revitalization & Engagement at the Cleveland Foundation and a passionate advocate for public spaces that build community.