Americans throw away nearly half of the food they buy. It’s a staggering statistic considering one in five Cuyahoga County residents are going hungry, according to Stacy Soulimiotis, Program Director of the Hunger Network of Greater Cleveland.

“It makes no sense that food—perfectly viable, good food—isn’t being given to those who are in need,” she said.

On Nov. 30, 2018, the Hunger Network of Greater Cleveland launched its Food Rescue Program to help Northeast Ohio cut down on food waste and help put fresh, healthy food on dinner tables across the city.

These items get turned down for a variety of cosmetic reasons, from a pepper running too small to an orange not being quite “orange” enough.

“They may be ‘imperfect’ to someone, but they’re perfectly fresh and healthy,” Weingart said. 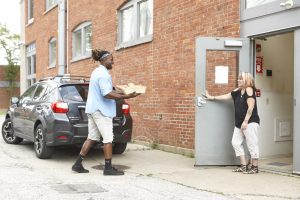 The Hunger Network’s Food Rescue Heroes pick up the items donated from partners like Perfectly Imperfect Produce and local grocery chains and deliver them to food pantries, hunger centers and other nonprofits across Northeast Ohio.

Since the app launched in 2018, more than 500 people have downloaded it and more than 235,000 pounds of food have been rescued. Soulimiotis said funding from the Cleveland Foundation has been instrumental in the program’s success. “The Cleveland Foundation is one of our biggest donors, and without them, we wouldn’t be able to operate this program in Cleveland,” she said.

Stay tuned for more “Stories of Impact” in our community featuring Cleveland Foundation partners and grant-funded nonprofit organizations. Looking to donate to a specific field of interest or open your own fund to support causes you care about? Visit www.ClevelandFoundation.org/Give.