Give Login Contact Search
In the Community / COVID-19 Response / From the Great Depression to the AIDS epidemic, a history of solidarity in times of crisis

In the 106 years since the Cleveland Foundation was established, our community has faced a number of serious challenges. Through it all, people and organizations across the region have come together to help Greater Clevelanders weather the storm. Today, the COVID-19 pandemic presents an unprecedented challenge for our community and others around the globe. While this latest crisis is unprecedented, our commitment to helping Greater Clevelanders is not. Looking back at a few key moments from history reminds us that together we have overcome difficult and uncertain times before, and we will do it again today.

A decisive response to the Great Depression 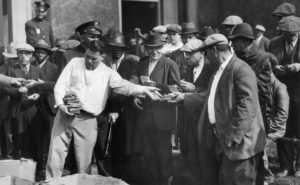 Before President Franklin Roosevelt’s New Deal programs began, the Welfare Federation of Cleveland stood as a principal safeguard protecting Clevelanders from the worst dislocations of the Great Depression. With more than 100,000 Clevelanders on the breadlines as of 1931, the need for social services of all kinds had never been more urgent. Meanwhile, the Welfare Federation struggled to meet its annual fundraising campaign goals to support Cleveland’s nonprofit welfare organizations and agencies. When it became clear that the fundraising campaign would fall short, the Cleveland Foundation stepped up with a contribution of $75,000, helping the fund surpass its goal by $30,000 and enabling the Welfare Federation to fully support its agencies’ increased requests for operating support. As the Depression continued, the Cleveland Foundation continued to make emergency allocations to the Welfare Federation’s Community Fund every year until economic conditions began to stabilize and private donations again enabled the Federation to meet community needs. 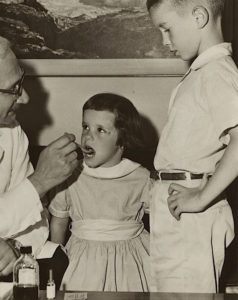 In the early 20th century, Polio terrified families across the country and paralyzed thousands of children each year. In 1933, one of the Cleveland Foundation’s very first medical research grants was awarded to support a City Hospital physician’s study of the causes of poliomyelitis. John A. Toomey, M.D., who was also a professor of clinical pediatrics and contagious diseases at the Western Reserve University medical school, continued to receive foundation backing through the early 1940s. The pre-eminence of his medical practice was a contributing factor in City Hospital’s designation by the National Foundation for Infantile Paralysis as national respiratory care center in the 1950s.

Later, in 1962, a foundation grant helped Cleveland’s Academy of Medicine to launch what was at the time the largest mass polio immunization program ever undertaken in the world. Approximately 1.5 million Greater Clevelanders received the Sabin oral vaccine during the immunization campaign, preventing untold suffering and medical expenditures.

Joining the early battle against AIDS 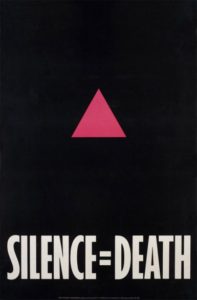 In the period before early screening tests and improved antiretroviral treatments transformed AIDS into a long-term chronic disease for most patients in the United States, the Cleveland Foundation and our partners advocated for preventative education and proactive healthcare programs to lessen the disease’s impact in Cuyahoga County. In 1983, foundation staff met with the City of Cleveland’s health commissioner and encouraged the city to move forward with planning for a widespread education program targeted at high-risk groups. In 1986, the foundation followed up with a $67,000 grant for the city’s first public awareness campaign. These initiatives stood in contrast to the attitude adopted in other peer Midwestern cities, where AIDS was still misunderstood and not perceived as a major public health threat. The Cleveland Foundation joined The George Gund Foundation in pushing for Cleveland’s inclusion in a demonstration project initiated by the Ford Foundation to stimulate a community-wide attack on the disease in nine metropolitan areas. Ford’s National Community AIDS Partnership Project was based on Cleveland’s response to the epidemic. The Cleveland and Gund Foundations raised $1 million for project grants that helped to pave the way for what became a collaborative, broad-based response to AIDS in Greater Cleveland.

With continuing financial support from the two foundations, a Citizens Committee on AIDS/HIV was convened in 1992. The 13-member committee, which included a number of persons living with AIDS/HIV, reviewed service and funding gaps and developed an action plan that led to the AIDS Funding Collaborative (AFC). Supported by Cleveland and Gund, the Cuyahoga County Commissioners, United Way Services and the National AIDS Fund, AFC awarded grants to implement the citizen committee’s wide-ranging recommendations and encourage the community’s coordination of services. Since its inception in 1994, AFC has distributed more than $8 million to private and public-sector providers for research, treatment and related social services.

Partnering in a rapid response to COVID-19

History continues to be written today as partners from across Northeast Ohio come together to support nonprofits serving on the frontlines of the COVID-19 pandemic in Cuyahoga, Lake and Geauga counties. Soon after the first COVID-19 cases were confirmed in Ohio, the foundation joined 52 different corporate, civic and philanthropic partners to raise more than $7.1 million for the Greater Cleveland COVID-19 Rapid Response Fund. In the first few weeks of the fund, the partners awarded more than $2.3 million in grants to help local nonprofits meet the surge in demand for basic needs – food, safe shelter, personal protective equipment and vital services – among Greater Cleveland’s most vulnerable residents. As this pandemic and its effects continue to unfold, the Rapid Response Fund partners plan to continue to make grants on a weekly basis through June, with the potential to expand funding opportunities as needed and as additional funds become available through new partners joining the effort. You can learn more about the Greater Cleveland COVID-19 Rapid Response Fund here.

Recognizing the unprecedented challenges faced by caregivers at health systems throughout Northeast Ohio and the critical role they will continue to play in ensuring the recovery and resilience of the community, the Cleveland Foundation also authorized $1 million in emergency funding to support a significant portion of a clinical trial – led by University Hospitals in partnership with Case Western Reserve University, MetroHealth and Summa Health – to assess whether the investigational drug ARMS-I helps prevent airborne transmission of coronavirus and whether it reduces the symptoms of healthcare providers who have tested positive for the virus. With the funding coming from previously restricted health-related research grant dollars at the foundation, our support for the clinical trial reinforces our commitment to all the compassionate individuals who work on the frontlines every day in service of our most vulnerable residents. Learn more about the clinical trial here.

These are just a few examples of our community coming together to overcome adversity. You can explore more stories from our history here.