The month of May recognizes the identity of Asian Americans and Pacific Islanders (AAPI). AAPI Heritage Month is an opportunity to reflect on the influence these cultures contributed on the world. AAPI Heritage Month also provides a time to acknowledge and gain a better perspective of their unique experiences. The term AAPI covers a broad span of cultures from multiple regions ranging from West Asia to the Pacific Islands.

Over the past year, the nation witnessed a rise in anti-Asian incidents and hate crimes, often fueled by racist rhetoric in response to the pandemic. Between March 2020 and March 2021, 6,603 anti-AAPI incidents have been documented by the group Stop AAPI Hate. The targeted shootings in Atlanta spas and a FedEx facility in Indianapolis were among the hate crimes that received national attention. The rise recently resulted in the passage of the COVID-19 Hate Crimes Act, which provides resources to help prevent hate crimes against the community.

Revisiting our history to understand our present

On May 19, the Cleveland Foundation’s Employee Engagement Committee invited Statewide Co-Director of OPAWL Tessa Xuan and MidTown Cleveland Vice President of Community Development Joyce Huang to share their insights as members of Cleveland’s AAPI community. During the “Lunch and Learn” event, TCF staff were able to participate in a discussion of the history, challenges and available resources to support our AAPI neighbors. 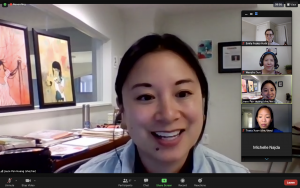 The area of Greater Cleveland is no exception to violence against AAPI identities. Xuan highlighted several recent events that transpired across the state of Ohio and in the Greater Cleveland community. This year a Vietnamese restaurant in Riverside was vandalized twice, resulting in its closure. Huang recounted the experience of another staff member from Midtown who was verbally assaulted on the RTA because of their race and another staff member who was called a racial slur and whose car was spat upon.

“These are not new issues. These are types of experiences that many of us have had, especially in the Midwest,” said Xuan. 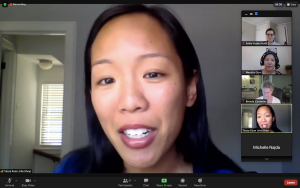 After displaying a powerful video highlighting the community and outlining the startling rise of violence, the presenters delved into the historical context of anti-Asian policies that were put in the U.S. along with the existing racism and its impact on the AAPI community. One of the earliest policies against the AAPI community was the Page Act of 1875. The act was the first major law to restrict immigration in the United States, as it specifically targeted Asian women.

As Huang noted, following the Page Act, policies like the Chinese Exclusion Act of 1882 and Executive Order 9066 in 1942 pushed against the naturalization of the AAPI community. Many fought against this opposition to obtain their citizenship. Notably, in 1898, a U.S.-born Wong Ark Kim argued in front of the Supreme Court advocating for his citizenship by birthright.

Both presenters went on to discuss the term, “model minority” coined by a white sociologist in the 1960s. After compartmentalizing the socioeconomic success of Japanese Americans, the term inadvertently gave AAPIs an unrepresentative expectation as the “good immigrants.” Ultimately, as Xuan shared during the presentation, the “model minority” myth erases the lived experiences of AAPIs and invalidates their struggles.

Resilience in the face of racism

Despite the rampant racism, active spaces exist in Greater Cleveland dedicated to supporting the AAPI community. The presenters shared the origins of Cleveland’s first Chinatown in 1860 after a growth in the Chinese population. After being displaced due to eminent domain on W. 3rd Street and the interstate highway construction near Rockwell Ave., the community resettled along Payne Ave. and rebranded as AsiaTown.

As the name suggests, AsiaTown still serves the Asian community in Cleveland, with residents coming from diverse racial backgrounds with a mix of Asian, Black and Latinx individuals. The majority of the Asian population are of Chinese descent, with others having a mix of languages and dialects.

AsiaTown continues to build the overall community with an employed staff team of Asian descent. The staff support AsiaTown by uplifting community voice and civic power and offering social justice activities to provide resources relating to immigration and voting. Residents in AsiaTown also helped to uplift the community. Every weekend in a former Dave’s Markets’ parking lot, a group of Asian women from around the community gathers to square dance as a form of exercise due to the pandemic.

The presentation then went on to reflect on those in the AAPI community who fell victim due to violence relating to their identity. There is still a needed focus on supporting the AAPI community to improve visibility and allyship. Emilie Olsen was a victim of bullying in her school due to her transracial identity. Her school took no action to prevent further bullying.

She died by suicide at the age of 13.

In 1982, Vincent Chin was killed in Michigan by two men in retaliation to the success of Japan’s auto industry. Coupled with the existing anti-Japanese sentiment, the men proceeded to beat Chin and use racist language against him. One of Chin’s attackers was cleared of all charges by a Cincinnati jury in 1987.

Chin was of Chinese descent.

What’s next? The role of funders and community groups

As foundation giving increased nationally over the past decade, funding designated for AAPI communities has remained stagnant and even dropped to only $0.20 of every $100 awarded by foundations in the U.S. Only a small number of foundations give support to the AAPI community. One of the biggest portions comes from the Asian American Foundation, which recently announced it had raised nearly $1.1 billion to support AAPI communities.

Several key areas still need support within the AAPI community. Through direct services or leadership development, it’s important for those in the community to feel valued and supported by Greater Cleveland. OPAWL’s campaign, the budget advocacy toolkit, ensures that AAPI voices are heard, and funding is set aside to support community organizations.

Overall, communities need to provide cross-racial intersectionality to build solidarity in representation and justice for all marginalized identities. As the final days of AAPI Heritage Month unfold, an abundance of effective resources are available to support AAPI identities all year-round.