CLEVELAND – Neighborhood Connections, the nationally recognized, community-building program, is proud to announce $3.1 million in funding from the Cleveland Foundation.

The foundation’s board of directors approved the three-year grant earlier this year. The continued funding supports Neighborhood Connections’ signature initiatives – its grassroots grants program and the work of the Neighbor Up network, a diverse group of Greater Cleveland residents striving to make positive change in their neighborhoods and find innovative solutions to larger health and employment issues plaguing communities.

“We could not do what we do without support from the Cleveland Foundation,” said Tom O’Brien, program director of Neighborhood Connections. “The funding allows residents to continue working for meaningful change – not only in their own neighborhoods, but across the entire city.” 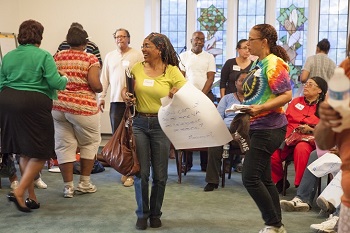 In addition, Neighborhood Connections’ Neighbor Up network is leading community engagement work in several Cleveland neighborhoods and with University Circle anchor institutions. The network now has more than 2,000 active members, representing a broad constituency from neighborhoods and anchor institutions. Among the initiatives launched through the Neighbor Up Network are “Step Up to UH” – a jobs pipeline training program – and the “Neighbor Up Wealth Collective” – a group of neighborhood-based small businesses. Since the launch of these projects, 182 residents have been hired through Step Up and a total of $5,500 has been earned by Wealth Collective members at community events.

The Cleveland Foundation launched Neighborhood Connections in 2003. Its mission is to fuel the power of neighbors to create, together, an extraordinary world right where they live.