CLEVELAND – FRONT International: Cleveland Triennial for Contemporary Art announces the launch of an artist residency program to be located in a new arts campus in Cleveland in September 2017, which will mark the start of programming for the inaugural edition of the region-wide exhibition. With support from the Cleveland Foundation’s Creative Fusion program, FRONT International will bring six international artists to Cleveland for residencies beginning this fall. The artists, selected by Co-Artistic Directors Michelle Grabner and Jens Hoffmann, will live and work in Cleveland as they research projects that will be unveiled as part of the first Triennial, titled An American City, taking place July 14 to September 30, 2018.

In addition to the six international artists, FRONT will bring six artists from across the United States to Cleveland to participate in residencies and prepare for their part in the Triennial. Six Cleveland-based artists will also participate in the residencies, programming, and preparation for the exhibition.

All visiting artists will reside and work in the newly developed Glenville Arts Campus. In partnership with the Famicos Foundation, a community development corporation located in the Glenville neighborhood of Cleveland, FRONT is repurposing two of the foundation’s currently unused properties, a former medical office building and an adjacent preschool. Serving as a forum and a gathering place, the campus will feature apartments to house the artists during their residency in addition to public program spaces, where artists can engage actively with the local community.

The opening of the Glenville Arts Campus will mark the culmination of a multi-year effort to stabilize and repopulate the stretch of East 105th known as Heritage Lane, where millions of dollars have already been invested by public, private, and philanthropic partners. The campus includes the Medical Arts building, a four-story, mid-century modernist building that once housed black-owned medical practices catering to the neighborhood’s African American residents.

With a $1.1 million loan from PNC Bank, the building’s three upper floors will be transformed into twelve new residential units, occupied first by a collection of international artists as part of the Cleveland Foundation’s Creative Fusion residency. The ground floor will be retrofitted as a community café and public meeting space.

“PNC has been a strong supporter of the arts and the revitalization of the East 105th Street corridor, and this project allows us to continue that mission,” said Michael Taylor, Senior Vice President of Community Development Banking at PNC. “The arts can enrich a community and be a catalyst for additional redevelopment, which lifts the region as a whole. We’re proud to be part of this exciting and meaningful project.” 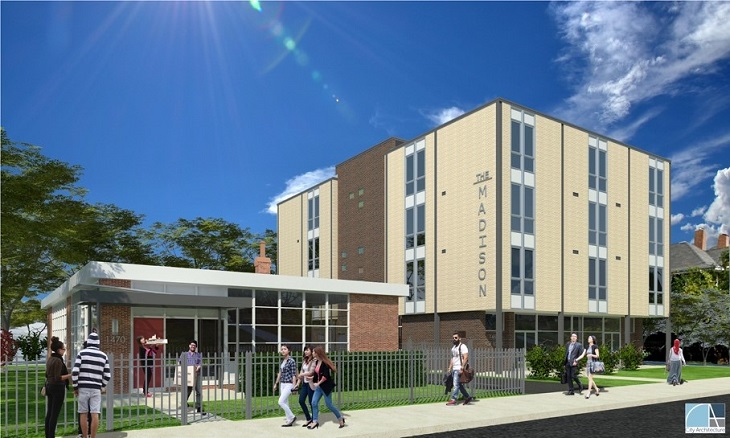 Next door to the Medical Arts building is a vacant single-story building formerly occupied by a neighborhood preschool. The building’s open floor plan, lofted ceilings, and oversized windows facing East 105th Street make it an ideal location for a studio workspace and meeting place for artists and community groups. The space between the two buildings—currently an asphalt drive and parking pad—will be re-created as flexible public space that connects the residential and café functions with the workspace next door.

The former medical office building plays a significant role in Cleveland’s history, as it was designed by Robert P. Madison, Ohio’s first African American architect, for a consortium of black doctors in 1962. The newly restored building will be named The Madison in honor of its designer. The redesign for the project is led by August Fluker of the Cleveland-based firm City Architecture.

“With the residency program beginning in the fall of 2017, the Triennial will start its program and its public engagement with the city of Cleveland,” said Jens Hoffmann, Co-Artistic Director of FRONT International. “The residencies are one element of a ten-part program of what we call Cultural Exercises, encompassing exhibitions, publications, research, and public events that together outline how we think about contemporary art as a catalyst for social change and a tool for positive transformation of economic inequality. It was important to us to bring together artists from around the world, the nation, and Cleveland to foster a dialogue about Cleveland’s position in the wider global cultural and political spectrum.”

FRONT Co-Artistic Director Michelle Grabner noted, “The Glenville residency offers artists a regional American geography and workaday temporal conditions to explore their ideas while being immersed within the varied cultural experiences of Cleveland.”

“Beginning this fall, the Glenville Arts Campus will be a lively hub for creativity, bringing visitors from around the world to a neighborhood that has been historically underserved and misunderstood,” said Fred Bidwell, Executive Director of FRONT. “We are pleased to be part of the Glenville community, and we welcome the opportunity to have a lasting impact on the neighborhood.”

Bringing international, national, and local artists together in the new Glenville Arts Campus, the FRONT artist residency program is made possible with major support from the Cleveland Foundation. In addition to financial support for visiting international artists, the Cleveland Foundation Board of Directors has provided major operating grant support to FRONT and recently approved a $350,000 capital grant to Famicos Foundation to make the property development in Glenville possible.

“This project aligns the resources of our Greater University Circle Initiative, which seeks to revitalize and connect the neighborhoods surrounding Cleveland’s iconic medical, educational, and cultural institutions with our Creative Fusion international artist residency program to create maximum impact and transformation,” said Ronn Richard, President and CEO of the Cleveland Foundation. “This project builds on our ongoing collaboration with Famicos Foundation in Glenville over the last several years. We are proud to support new connections being formed among residents, local artists, and the international arts community through the inaugural FRONT Triennial.”

FRONT International: Cleveland Triennial for Contemporary Art is a citywide program of contemporary art and the expression of a two-year engagement by an international team of artists, curators, and scholars with the creative resources of Cleveland. In museum exhibitions and unconventional sites spread across the city, FRONT will be an expansive stage for local, national, and international artists to create and share new work that is inspired by and engaged with the most important social, political, cultural, and environmental issues of today.

The Triennial will be an important showcase for Northeast Ohio’s cultural resources, convening artists, curators, scholars, collectors, and art lovers around a city- and region-wide celebration of contemporary art. Powered by all of Cleveland and Northeast Ohio’s renowned visual arts institutions, the exhibition will be unique in the world for the scope of its collaboration.

The first edition of the planned Triennial has been titled An American City. The themes and ideas explored by artists will be authentically rooted in the spirit of Cleveland and the region while connecting our history and future to issues and ideas that are universal and global.


About the Cleveland Foundation

Established in 1914, the Cleveland Foundation is the world’s first community foundation and one of the largest today, with assets of $2.1 billion and 2016 grants of $93.6 million. Through the generosity of donors, the foundation improves the lives of residents of Cuyahoga, Lake, and Geauga Counties by building community endowment, addressing needs through grantmaking, and providing leadership on vital issues. The foundation tackles the community’s priority areas—education and youth development, neighborhoods, health and human services, arts and culture, economic development, and purposeful aging—and responds to the community’s needs.