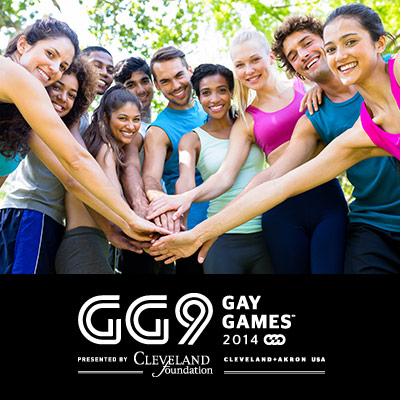 The Games released its final numbers at the “2014 Gay Games Lessons and Legacies” panel discussion hosted by The City Club today. The donations represent the net profit from the Games. Cleveland+Akron is the most profitable in Games history.

“The ability to give back to the community is a testament to the Gay Games 9 board’s leadership, which placed importance on operating in a fiscally responsible manner, as well as the tremendous corporate and individual donor support,” said Gay Games 9 Executive Director Tom Nobbe.

Ronn Richard, President and CEO of the Cleveland Foundation, explained that when the Cleveland Foundation decided to become the first presenting sponsor in Gay Games history, it also made the commitment to launch the Gay Games LGBT Legacy Fund in partnership with Gay Games 9. “We’re thrilled the fund is able to launch with such a significant donation from the Games themselves. It’s a great continuation of our century-long commitment to social justice in our community and we’re excited to have the fund grow and make a difference in Greater Cleveland.”

The Gay Games LGBT Legacy Fund of the Cleveland Foundation will help extend the environment of inclusion and diversity created as a result of the hard work these past four years to build a welcome community for thousands of LGBT athletes, allies and supporters who came to the region for this significant global event. The permanent endowment will support grantmaking, in combination with other available funds at the Cleveland Foundation, to organizations, programs and services that positively impact and support the LGBT community. People can contribute to the fund at any time by donating online at ClevelandFoundation.org/gaygames

About the Gay Games
The Gay Games is an international sporting and cultural event held every four years under the founding principles of Participation, Inclusion and Personal Best™. Launched in 1982, the Games invite participation from everybody, regardless of sexual orientation, race, gender, religion, nationality, ethnic origin, political beliefs, athletic or artistic ability, age, physical challenge or health status.

The 2014 Gay Games presented by the Cleveland Foundation were August 9-16, 2014, in venues around Cleveland and Akron, Ohio, in the United States. More than 35 sports and culture events were held, with more than 20,000 people from more than 50 countries participating and visiting. It generated more than $52 million for the Northeast Ohio economy.

About the Cleveland Foundation
The Cleveland Foundation is the world’s first community foundation and one of the largest today, with assets of $2.1 billion and 2014 grants of $98 million. Through the generosity of donors, the foundation improves the lives of Greater Clevelanders by building community endowment, addressing needs through grantmaking and providing leadership on vital issues.