Board of directors approves $8 million for transformation of Public Square; South plaza to be named “Cleveland Foundation Centennial Plaza”

CLEVELAND – The Cleveland Foundation board of directors today announced the latest in a series of centennial legacy grants commemorating 100 years of impact in Greater Cleveland. At a community event in Public Square, the foundation committed $8 million in a grant to LAND Studio, Inc. for the Group Plan Commission to transform Public Square. The Group Plan, working with nationally recognized landscape architect James Corner Field Operations, has developed plans for a dramatic $30 million transformation of Public Square that will make it a world-class public space in the heart of Cleveland. 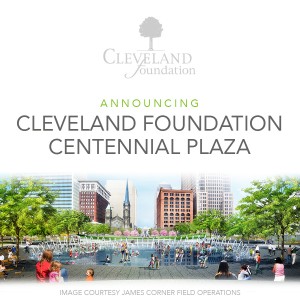 Planning officials for the Public Square revitalization project also announced that the south plaza of the redesigned space will be named “Cleveland Foundation Centennial Plaza” in recognition of the foundation’s commitment to creating a vibrant cultural and economic center for Cleveland and the region.

“For 100 years, the Cleveland Foundation has been committed to enhancing the lives of Greater Clevelanders through place-based philanthropy – generosity that is rooted in lifting a city to its greatest potential,” said Ronn Richard, President and CEO. “Public Square is the ultimate symbol of a ‘place for people.’ We can think of no better way to celebrate our next century of commitment to our community than by helping to transform the heart of our city into a gathering place in which we can all take pride.”

The foundation’s history of place-making support is evident throughout Cuyahoga, Lake and Geauga counties. For example, in just the last four decades, the Cleveland Foundation has granted nearly $6.9 million to LAND Studio and related organizations to increase access to high- quality public spaces, parks, and programming in and around Cleveland. Additionally, the Public Square Preservation and Maintenance Fund of the Cleveland Foundation, created in 1988, has granted more than $1.3 million to the Downtown Cleveland Alliance for the upkeep and maintenance of Public Square.

“Transforming Public Square into a welcoming park for all Clevelanders is central to our plans for making downtown a more vibrant, thriving urban core,” stated Mayor Frank Jackson.   “Today’s announcement by the Cleveland Foundation goes a long way toward making that transformation a reality.”

Public Square planning officials expect the grant from the foundation to be catalytic in securing the additional funds necessary to complete the transformation by May 2016.

“No public space is more central to Cleveland and to Clevelanders than Public Square,” said Group Plan Commission chair Anthony J. Coyne.  “With this centennial gift, the Cleveland Foundation has led the way for others in the community and made a historical commitment to transform the heart of our city for generations to come.  This catalytic gift puts us in a great position to deliver the world-class public space all Clevelanders deserve.”

“I extend my sincere thanks to the Cleveland Foundation, and congratulate the Group Plan Commission, for this $8 million grant to help revamp Public Square,” said Cuyahoga County Executive Ed FitzGerald. “This project is an integral part of our strategy to develop Downtown Cleveland, and I look forward to working with all those involved to continue to bring this vision closer to reality.”

The Cleveland Foundation’s centennial legacy grant series commenced in September 2012 with the announcement of $10 million to support Case Western Reserve University’s new medical education and research building. In 2013, the foundation announced plans to commit $10 million in grants to create a local Encore program in Cleveland, part of a national movement to utilize the time and talents of Americans aged 50-plus for the betterment of their communities.

The Group Plan Commission was assembled in 2013 to update and build upon Cleveland’s Group Plan of 1903, the iconic vision that helped shape the heart of downtown Cleveland more than a century ago.  The Group Plan is focused on three priority projects to transform and connect the city’s signature public spaces: redesigning and revitalizing Public Square, enhancing the downtown malls, and creating an iconic pedestrian connection between downtown and the lakefront. Working with partners like the Greater Cleveland Partnership, the Downtown Cleveland Alliance, and LAND studio, the Group Plan will combine public, private and philanthropic resources to complete these projects, complement the $3 billion in development in Cleveland’s downtown core since 2010, spur an additional wave of transformational development, and renew the heart of Downtown Cleveland for today’s Clevelanders and future generations. For more information, visit www.groupplan.org.