CLEVELAND – The Cleveland Foundation today honored Steven D. Standley, chief administrative officer for University Hospitals of Cleveland, with its 2014 Homer C. Wadsworth Award. The award is given annually to a local leader who has demonstrated creativity, innovation, ingenuity, risk-taking and good humor in a civic, volunteer, nonprofit or public sector role. Standley received the award at the Cleveland Foundation’s centennial meeting at Playhouse Square, presented by KeyBank. 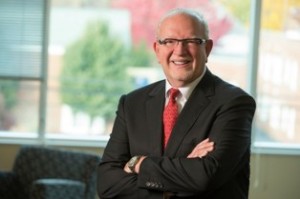 Since 2000, Standley has served in senior leadership roles at University Hospitals, including his current position as chief administrative officer. Through his innovative leadership, he has implemented workforce improvement programs which have offered residents of the surrounding urban neighborhoods the opportunity to connect to health care careers.

Active in the community, Standley is the founding and current board chair for Evergreen Cooperatives Corporation, a network of employee-owned businesses in the urban core that include a commercial laundry, greenhouse and energy services company. Since 2006, he has been a member of the Greater University Circle Initiative Leadership Committee, which is focused on revitalizing large parts of Greater University Circle. Additionally, Standley supported the launch and growth of NewBridge Center for Arts and Technology, which provides opportunities for youth and adults to build careers in the arts and health care.

“Steve truly embodies the innovative and creative spirit of former Cleveland Foundation president Homer Wadsworth,” said Ronald B. Richard, president and CEO of the Cleveland Foundation. “It’s especially meaningful that Steve receives this award during our centennial year because many of the programs Steve has initiated or enhanced have centered on improving the lives of our community’s most marginalized residents – and that tenet is at the heart of a community foundation’s mission. He is a passionate believer in Cleveland and its citizens and there is no question our city is a stronger community due to his impressive civic leadership.”

Homer C. Wadsworth was executive director of the Cleveland Foundation from 1974 to 1983. He was known as a man of creativity, courage, commitment and innovation. Prior to his death in 1994, Wadsworth’s friends and family established the Homer C. Wadsworth Award to identify and honor those in the community who best reflect those qualities.