Give Login Contact Search
In the Community / Arts & Culture / What’s the “Green” We’re Talking About? 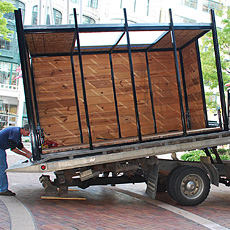 Cristian Schmitt, a 2011 Creative Fusion artist from Chile, came back to Cleveland for the wedding of a staff member at Playhouse Square – his host organization. He got so close to the people he worked with here that he continues to refer to Cleveland as his “home,” and he remains in touch with many of us. Cristian is an architect/designer who worked with a large number of nonprofit and for-profit organizations to create a unique product for Cleveland.

When I met with Cristian last week, I asked how his seven-month residency last year has resonated with him over time. He said he learned many things that have made a positive difference for him professionally as he’s continued his work. Among them: “What you know and what you used before in developing a project can’t be counted on or taken for granted. Each situation is unique and you need to adapt to the local conditions and resources.” Cristian said the residency made him much more confident in going into unfamiliar situations and being successful: “I can approach any project now.”

But he had much to say about Cleveland and his personal experiences as well. “It’s about the people, not the city. The city is just the container for the experiences.” He admitted to having some prejudices about American culture that came from his experiences in New York and Miami. “But that’s not America. Not everyone is blind to the rest of the world.” 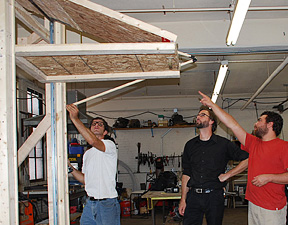 Cristian found Cleveland to be “much more complex than New York or Los Angeles. Nobody was doing this for the money, but for the ideas. This wasn’t a hobby for people – no eight-hour days. Everyone was willing to do more.” I took this as a testament to the authenticity of this place, its people, and the meaningful work we do here.

Finally, I asked Cristian what aspects of his culture might offer learning for us in the United States. He had some very specific ideas about his Chilean culture: “We have a way of thinking – we don’t have a lot of high tech and we are worried about our resources. We don’t waste much. If something breaks, we fix it or recycle it. Here you have IKEA. We turn off the lights. What’s the ‘green’ we’re talking about?”

On the other hand, he admired Americans’ work ethic: “In Chile, we all have nannies. They think it would be impossible to live without one. People don’t see how you work and take care of your house and children all by yourself, but in the U.S., you do.”

View other posts about his residency